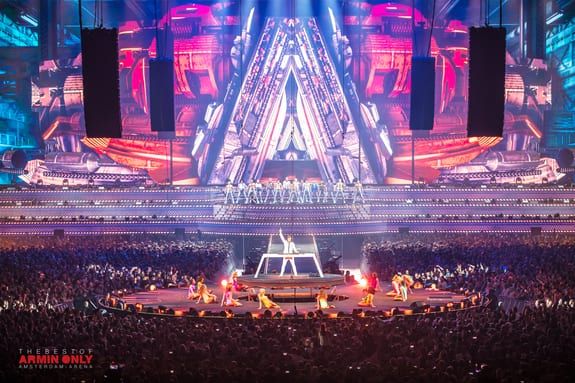 80,000 fans from 97 different countries witnessed Armin van Buuren make history this past weekend (May 12 & 13), as he SOLD OUT two colossal shows at the Amsterdam ArenA.

With a 1200m2 LED screen, two hundred crew members and two thousand fireworks in tow, ‘The Best Of Armin Only’ truly was Armin van Buuren’s biggest solo show ever. Armin van Buuren said, “I’m still shaking from all this. This show, this crowd… It was absolutely phenomenal. I’m a bit bummed out that it has gone by so quickly, but I enjoyed this so, so much. I’d like to thank everyone for their support and all of their hard work, my fans of course and also Alda, 250K, DLP, Armada and Corrino Media Group. ‘The Best Of Armin Only’ isn’t just my ultimate highlight. It’s ours!”

The livestream on arminonly.tv, Facebook Live and Dutch television station RTL 4, reeled in over 4.8 million viewers from all over the globe and showed the full extent of what ‘The Best Of Armin Only’ had to offer. Joined on stage by 22 artists, 45 dancers, ten acrobats, four trampolinists and a drum band made up of fifty-six people, Armin van Buuren went all out for ‘The Best Of Armin Only’.

This past Saturday, before the start of the second show at the Amsterdam ArenA, Armin van Buuren also launched his ‘The Best Of Armin Only’ album. The album captures the essence of all of Armin van Buuren’s previous ‘Armin Only’ shows and contains highlights as well as brand new music played during ‘The Best Of Armin Only’. The album is also available in a special box, which includes four photo cards, a custom-made sound box and 56 pages of exclusive photo material in addition to the two CDs.