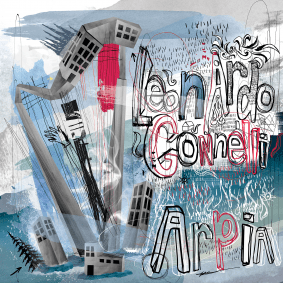 Leonardo Gonnelli’s new EP ‘Arpia’ is set to drop on Audiojack’s Gruuv imprint this August with a remix from James Dexter.

Heavily influenced by the acid house and Detroit techno sound, Italian producer Leonardo Gonnelli’s career began more than a decade ago in Florence and he has since gone on to release on labels like Get Physical, Play It Say It and Knee Deep In Sound among others. With appearances at Pacha, Space Miami, Dockyard Festival and Sonar Off Week, Gonelli is no stranger when it comes to performing and through his productions has picked up support from high profile artists like Seth Troxler, Loco Dice and Richie Hawtin to name a few.

Title track ‘Aripa’ kicks things off with rugged drums and wandering synth arpeggios which become more frenzied and reverberant throughout the track before ‘Discodee’ delivers a pulsating bass groove, off-kilter whistles and underpinning vocal whispers to create a mysterious vibe.

Next up, ‘Just for Kicks’ sees Gonnelli utilise a rumbling low end, a thunderous kick drum and cosmic pad swells prior to James Dexter’s reworking of ‘Just for Kicks’, which brings a hooky, robotic vocal loop and crisp, clean drum samples to conclude the package with a well refined feel.