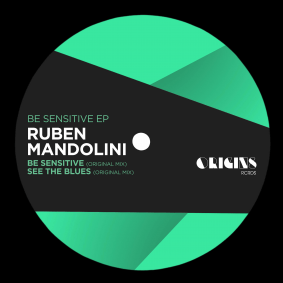 Founded in late 2016, Origins Rcrds has quickly become a go-to imprint for material across the house spectrum, boasting support from key players including Jamie Jones, Joris Voorn, Seth Troxler DJ Sneak, and Anja Schnider, whilst releasing material from Kerri Chandler, Huxley, Nick Curly and Bontan to name just a few. Having previously released on the likes of Saved, Stereo Productions and Sanity, not to mention his stand out 2012 single ‘Also!’ on Snatch!, here we see Italian DJ and producer Ruben Mandolini make his label debut with a slick two track offering on Butler’s Origins Rcrds entitled ‘Be Sensitive’.

Title track ‘Be Sensitive’ opens the EP in style as Mandolini combines a medley of crisp drum licks, classic vox samples and interjections with vibrant snare rolls to reveal a kinetic lead cut aimed at the dance floor. On the flip, ‘See The Blues’ takes up a more stripped back aesthetic, employing rolling percussion, infectious vocal hooks and rich pads amongst weighty kicks to shape up the release with authority.

Ruben Mandolini ‘Be Sensitive’ EP is out on Origins Rcrds on 27th July 2018.