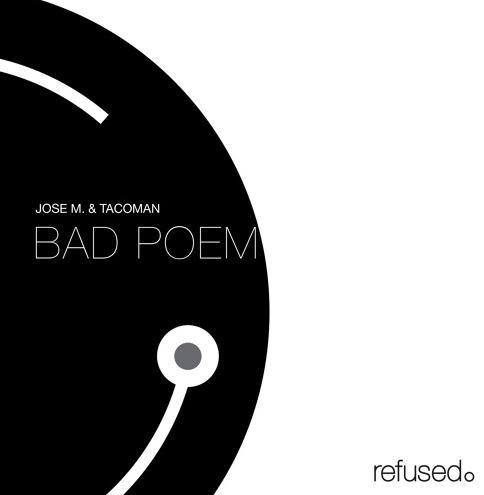 refused. welcomes some South American infusion to the roster with the addition of Columbian based duo Jose M. & Tacoman. The well-established duo present a fresh, funky 3-track EP titled “Bad Poem” out on Tuesday October 27th. Working with a number of different elements such as synth oscillators, strong percussions, pumping basslines and deep vocals, this EP is a recipe for epic dancefloor distortion. The EP has  received incredible support from the likes of Blond:ish, Dubfire, and Richie Hawtin.

Growing up in a lively city such as Mendellin, Columbia, Jose M. & Tacoman have acquired a unique sound in their productions which tributes the culture and vivacity of their hometown. Together, Jose M. & Tacoman have evolved a sound that incorporates a little bit of deep, tech, house and disco to formulate atmospheric masterpieces that will trigger all your senses.

“Bad Poem”- while minimal in terms of the use of elements, the track has an in-your face groove that will be sure to move dance floors. The synth line and use of vocals throughout help move the track forward while the bass is pumping.

“Solstice”- has smooth filters which sweeps throughout the song to give the track a very organic feel. This is driven forward by the interplay between the kick and the subby baseline.

“Theorem” – the hi-hat and drum fills in the background give the track a very loose, almost jazzy quality. This is further enhanced but the vocal loop that is apparent throughout the track. The drone-y synth break is a very nice juxtopozition to the smoother elements of the song.
ABOUT JOSE M. & TACOMAN

With over 10 years of experience for each one of them, and working by them self in different paths, they join forces and knowledge in 2010, recording their first album called “Cause and Effect”. This album was signed and distributed by their own label “Attary Records”, and reaching record sales for the label that same year.

Influenced by bit dark acid sounds with spicy atmospheres, they achieve what they call Blunt Music. This style is strictly designed for the dance floor. Up until now and with over 100 releases and over 20 tracks in top sales, they achieve recognition with the biggest exponents of the Latin-American industry in less than 4 years; transporting huge masses across the American and European continents with sounds like “Tech House”, “Deep Tech” and “Duby Tech” with an essence of relevant sounds such as “House”and “Disco”. Their music has been played in renowned sets of giant artists such as Richie Hawtin, Matthias Tanzmann and Joris Voorn, just to mention some of them.

They recently signed with important labels like “Get Physical”, “Bla Bla”, “Material” and “Trapez”, amongst others. This has consolidated their musical work, and has brought an ample catalogue in vinyl and digital formats.

This is just a small appetizer of what, with no doubt in mind, this duo will achieve and project for their future.