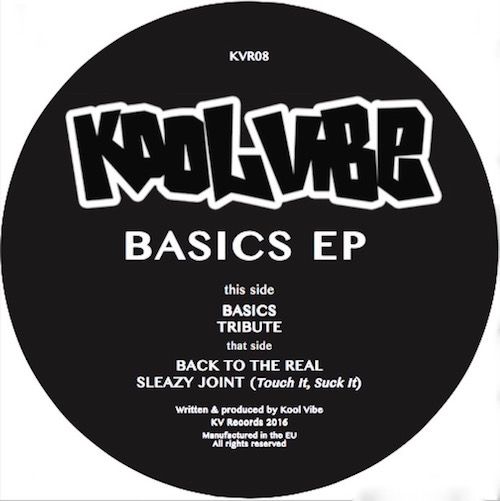 An enthusiast of house since the ‘90s, Kool Vibe acquired a taste for the genre at the renowned Boy’s club courtesy of legends such as DJ Deep and Laurent Garnier. He started producing himself a decade ago, with his debut releases landing on My Love Is Underground and Traxx Underground in 2011 and 2012 respectively. A year later saw the launch of his KV Records, a platform primarily for his own material whilst also hosting the likes of Alex Agore, Inner Sense, Sunny Galaxy and Washerman.

The release generates US deep house aesthetics from the off, with ‘Basics’ laying down thudding kicks, off-kilter chords and a chopped vox. ‘Tribute’ is then humbly dedicated to Todd Terry, fusing syncopated percussion with clever sampling for a thunderous dancefloor workout. Next, ‘Back To The Real’ resumes the raw sounding elements alongside shuffling hats and echoing stabs, until ‘Sleazy Joint (Touch It, Suck It)’ concludes the package in a sensual finale.

Basics
Tribute
Back To The Real
Sleazy Joint (Touch It, Suck It)
http://www.koolvibe.fr