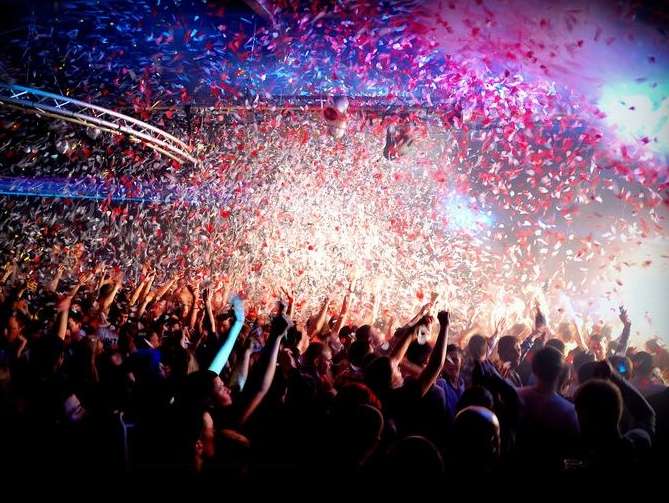 Another sizzling season is about to get underway at BCM Mallorca, always officially one of the best clubs in the world according to DJ Mag. In 2016, another mouth watering weekly program has been put together with big name brands, international DJ stars and plenty of fun all lined-up and ready to roll all summer long. Amongst the big names playing four dates throughout the season are d&b chart toppers Chase & Status ahead of their new album, plus the one and only dance crossover star DJ Example, whilst grime king Tinie Tempah also plays four very special dates, all in all making for a record breaking season at BCM Mallorca.

BCM Mallorca—the biggest club on in the island— is a party paradise on a grand scale. It is a mega-club with a wild spirit, massive ice cannons, colourful dancers, vast lighting rigs, giant LCD screens, ravers from all over the world, a killer 175, 000 watt Funktion One sound system, confetti explosions, foam parties, fun loving attitudes and an awesome dance floor on which to get lost in the music. It also has a VIP area, a Terrace, themed bars such as Baywatch and podium dancers which add to the euphoric atmospheres at each and every event. Those events in 2016 feature the biggest names from house, techno, EDM, urban, commercial and bass music.

Mondays will be all about the world famous Cream who take over from June 13th to September 12th, whilst they also take over on Wednesdays from July 6th to September 7th. Line-ups will follow soon with some of the biggest names in electronic music. Tuesdays will be helmed by Radio 1 star Danny Howard presents Nothing Else Matters. The taste-making boss will play with a selection of his key artists every week so expect plenty of cutting edge names from the dance world.

Thursdays will be the return of the much loved BCM Presents with talents like Chase & Status playing a spectacular 4 date mini residency. The duo, who turn out massive chart topping hits and play only the biggest gigs around the world, have a new album on the way soon so have never been hotter or more in the headlines than now.  Also playing BCM Presents this summer will be the UK's dance and hip hop tastemaker, chart topper and Sony act Example. He also has a new album coming and it is sure to follow on from the massive likes of 'Kids Again' and 'All The Wrong Places.' DJ Wire  will support Thursdays on the reg.

Meanwhile Friday is another returning favourite in the form of Mistajam Presents, the first and last party you need for all things urban with the Radio 1 star. Playing with him for four very special shows as part of a mini summer residency will be the one and only grime king Tinie Tempah.

Saturdays, as always, will be the spectacular Supermartxe with Spanish hero DJ Sammy and friends, and Sunday will be a one of a kind Club MTV Party with R3wire and Varsky and some top residents. MTV will also send a camera crew to follow Majestic Live and Micky Slim across Europe in summer and it will all be aired, with plenty of BCM footage, no doubts, in winter, so you could become a TV star!

More details will follow in the coming weeks but already BCM 2016 is shaping up to be utter party heaven!