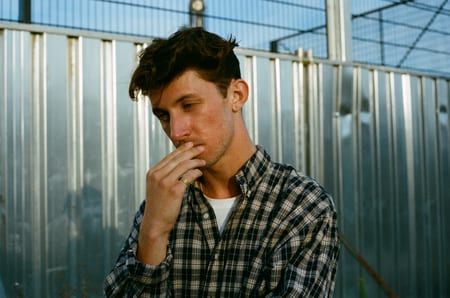 British artist/producer Bearcubs released his debut album 'Ultraviolet' to critical acclaim earlier this year, establishing himself as one of the most exciting electronic acts emerging from the UK right now. With Annie Mac, MistaJam and Huw Stephens at BBC Radio 1 heavily championing his singles and respected tastemakers such as Mixmag, FADER, Noisey, i-D, The Line of Best Fit and Majestic Casualpraising his talents, support for the 26-year old's artistry continues to grow.

Today Bearcubs (real name Jack Ritchie) has released two demo versions of previously unheard tracks that didn't make the final album tracklisting, as he readies himself for a return to the UK for some headline live shows following a recent move to Berlin. With premieres onClash and Complex, you can listen to 'Architect feat Alyssa' and 'Lock On feat Vasser' via the links below:

The release of these demos and the forthcoming live dates mark the end of the 'Ultraviolet' chapter, with those present at any of the shows to be first to hear new music from his next album project. Live dates as follows:

"A warm embrace on a chill winter’s morning…SBTRKT-like production and a soulful croon." – Mixmag
"Bearcubs offers a plush mosaic of organic instrumentation and syncopated synth sounds" – Noisey
"An enveloping listening of metronomic ticks and Ritchie’s soulful hush" – The Line of Best Fit
"You could see this becoming a hit…like a depressed Disclosure" – The Guardian
"The perfect level of musical claustrophobia and emotion" – MTV UK
"We really like it" – Annie Mac, BBC Radio 1
"Sublime" – The FADER