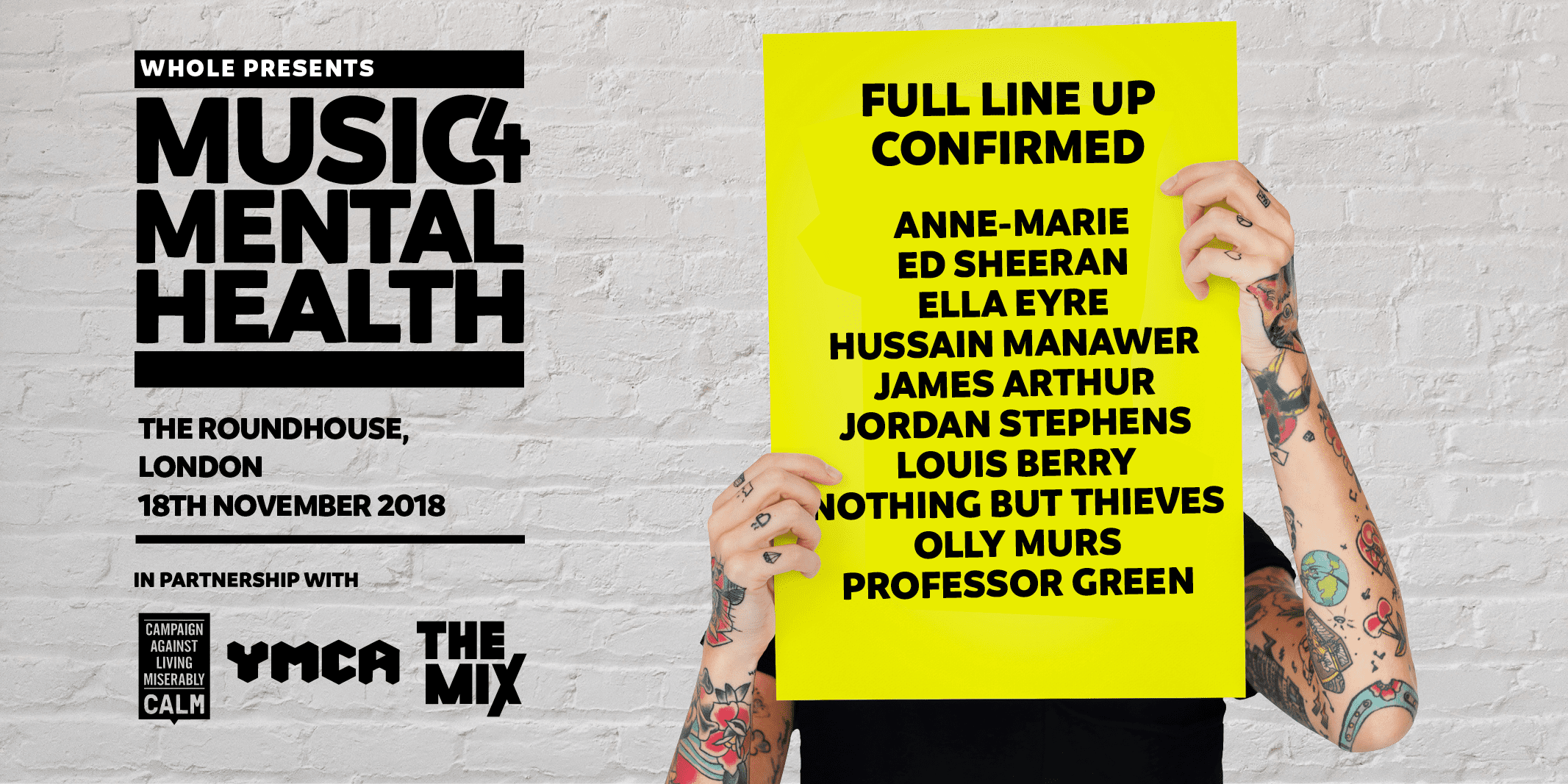 One of the most exciting dates in the UK music calendar, Music 4 Mental Health has announced it’s final acts and released a limited batch of final tickets, due to phenomenal demand.

British rapper Professor Green will be performing tracks from his three studio albums, ‘Alive Till I’m Dead’, ‘At Your Inconvenience’ and ‘Growing Up In Public’. Professor Green is famed for his incendiary live performances as well as his acclaimed documentaries notably ‘Working Class White Men’ which aired on Channel 4 as well as BBC shorts on homelessness, poverty and suicide; throughout his career, he has been particularly outspoken about mental health.

Louis Berry sprung to prominence with a host of highly-praised singles and EP’s showcasing his tremendous voice and emotionally charged lyrics. Combining rock and roll with elements of soul, there is a unique vibrant energy to his live shows and Berry is one of the most highly-regarded new artists to emerge in the UK in recent years.

Returning to support #IAMWHOLE after appearing as last year’s ambassadors areNothing But Thieves. One of the biggest rock acts in the UK, Nothing But Thieves have enjoyed milestone crossover success with their two studio albums, the eponymous self-titled debut and last year’s ‘Broken Machine’ which entered the UK album charts at Number 2.

Nothing But Thieves say;
“It is an honour to be part of a campaign as relevant as the #IAMWHOLE campaign. Mental health is something that has affected us not only personally, but also our friends, family and fellow musicians. It is an issue which we have seen go from something largely ignored in the public eye, to being a recognised problem that needs to be addressed. The #IAMWHOLE campaign has played a huge role in this and should be proud of that achievement.

We can't wait to play the first ever Music 4 Mental Health gig on the 18th of November with a great lineup of like-minded musicians. See ya at the Roundhouse.”

Hussain Manawer says;
“Events like this are the reason I live, to spread a message, raise awareness, and most importantly let people know they are not alone. I can't wait to touchdown and get involved”.

A monumental collaboration project, Music 4 Mental Health is proud to partner with the UK and Ireland’s leading youth and mental health charities; the Campaign Against Living Miserably (CALM), The Mix and YMCA.

TICKET INFORMATION
A very limited allocation of general tickets and VIP tickets to Music 4 Mental Health will be available fromwww.whole.org.uk/music-4-mental-health/, with more information accessible from the official site also.

Music 4 Mental Health is running a strict anti tout policy for this event – appointing Twickets as the official resale partner for this event. Twickets is a fan-to-fan ticket resale marketplace where the price of tickets is never more than the original face value. Tickets can only be resold via this platform.

Buying or selling tickets on any other platform is strictly prohibited. Transfer of names on tickets is not allowed unless re-sold via Twickets, to ensure full transparency and fair access to tickets.