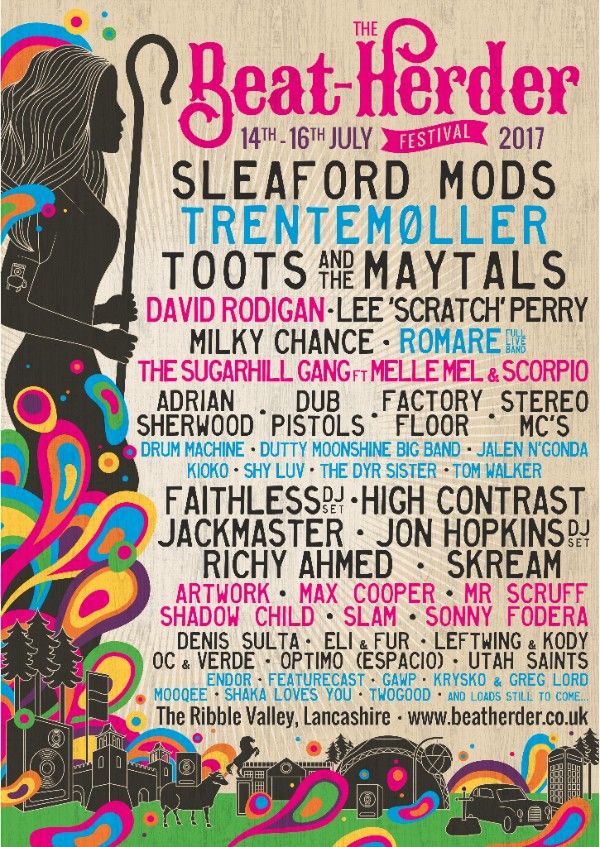 The barmiest festival in all the land, the treasured Beat-Herder returns in 2017 with its unrivalled and eccentric party in the Ribble Valley, Lancashire.

One of the few remaining independent festivals in the UK, Beat-Herder is a place where different musical tribes congregate as one. Throughout the event's 12 year history, they have united the subcultures of dance music and beyond: dub, reggae, house, psytrance, techno, indie, rock, psychedelic, drum & bass and dubstep are all presented across 21 stages.

Performing on Saturday will be anarchic music duo Sleaford Mods, in what will be their only UK Northern festival appearance of 2017. Joining them will be Danish multi-instrumentalist Trentemøller, who will take to the main stage with a full live band. In addition, musical innovators from all corners of the globe, each having led the way in their respective fields: dub hero Lee 'Scratch' Perry, progressive ska and rocksteady legends Toots and the Maytals, celebrated UK figure David Rodigan (MBE), and the hugely influential hip-hop group The Sugarhill Gang.

The Toil Trees stage is the beating heart of the festival. Discovering this special place will lead you back in time to where it all began; an electrifying party in the woods. A stage surrounded by unspoiled pine trees, it's a favourite meeting place for revellers to grab a beer, discover secret venues, or simply take in the magical surroundings. This year, legendary founding fathers of British electronic music Faithless, Shadow Child, party-starter Skream and one of Glasgow's finest exports, Jackmaster,  will all play amidst the Toil Trees.

At Beat-Herder, the music is only just the beginning of the experience. Renowned for its entirely handmade site, which is lovingly crafted from scratch, the eccentric creators source unusual materials to conjure up unique and impressive elements and stages to explore and discover. At a time when all festivals have started to look the same, there is truly no other like Beat-Herder. Testament to their scrupulous attention to detail, they are previous winners of the 'Extra Festival Activity Award' at the UK Festival Awards which 'recognise that extra bit of attention to detail that creates magical and unforgettable experiences'.

Originating from roots as a DIY free party on the Northern moors in 2006, the creators of Beat-Herder were inspired to design an intimate party in the Ribble Valley, Lancashire, an area of charming natural beauty and the perfect festival backdrop.

Beat-Herder continues to exist as it did then; uncompromising, unwavering and distinguished by an overwhelming sense of community. Its reputation as one of the friendliest festivals around, can be attributed to its loyal followers; a hybrid demographic of friends, couples, families and individuals alike, many of whom have grown with the festival, creating new memories with each passing year.

Unparalleled, unorthodox and unflinchingly bonkers, Beat-Herder's arms are open wide to welcome one and all in 2017.