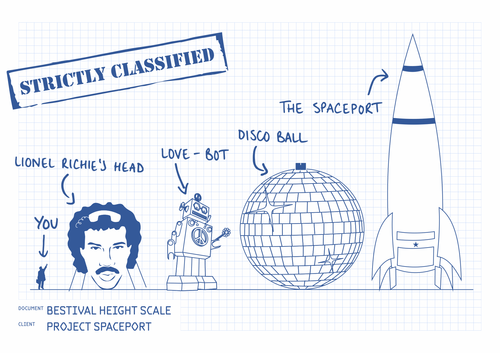 The legendary Port remains missing, its whereabouts unknown but Bestival’s brand new, revolutionary monolith of sound, The Spaceport, is shaping up to be the greatest dance stage ever! Throbbing to an intergalactic soundscape of epic proportions, our seven storey symbol of the future will transmit Bestival’s unique vision of our dancefloor destiny as we unveil the crack squad of space cadets, who will be joining previously announced Spaceport headliners Diplo, Carl Cox, and Fatboy Slim, to blast us into the unknown this coming September on the Isle of Wight.

Bestival rave-master Rob da Bank says: “Prepare for lift off my futuristic friends, this is going to be the stage of the summer of UK festivals. A dream team of Josie da Bank, our mate Paul Normandale, who’s Bjork and Coldplay’s lighting designer, super set designers Spatial and a host of madcap inventors are building an incredible imaginary Spaceport for you to rave at and take off into The Future. In that rocket will be no less than rave veterans Fatboy Slim, Carl Cox, Diplo, DJ Yoda and Candi Staton propped up by newbies like DJ Barely Legal and Mele and Monki… The Future is almost here”.

Following an out of this world opening ceremony, we’ll be heading into orbit as we ramp up the rave action with a cavalcade of advanced selectors including Benji B, Destructo, DJ Barely Legal, DJ Yoda, Dub Pistols Soundsystem, Eats Everything, James Zabiela, Kenton Slash Demon, Klose One and Mella Dee.

And hitting the decks to take us beyond the solar system of sound will be Mount Kimbie, Mumbai Science, Norman Jay MBE, NRG Flash: Monki & Mele, Oneman going back to back with My Nu Leng, Purple Rave Prince Tribute from Heidi, Rob da Bank & Tayo, Riton, Sink The Pink presents No Limits with Candi Staton & Livin’ Joy, Skream and The Heatwave.

The epicentre of the inevitable and the future of the dance, The Spaceport is where the party’s at. Don’t miss it.

There are still plenty of treats to be revealed for our Future paradise, including our Sunday night main stage headliners and much more, so head to www.Bestival.net, Facebook, Twitter, Instagram / Tumblr