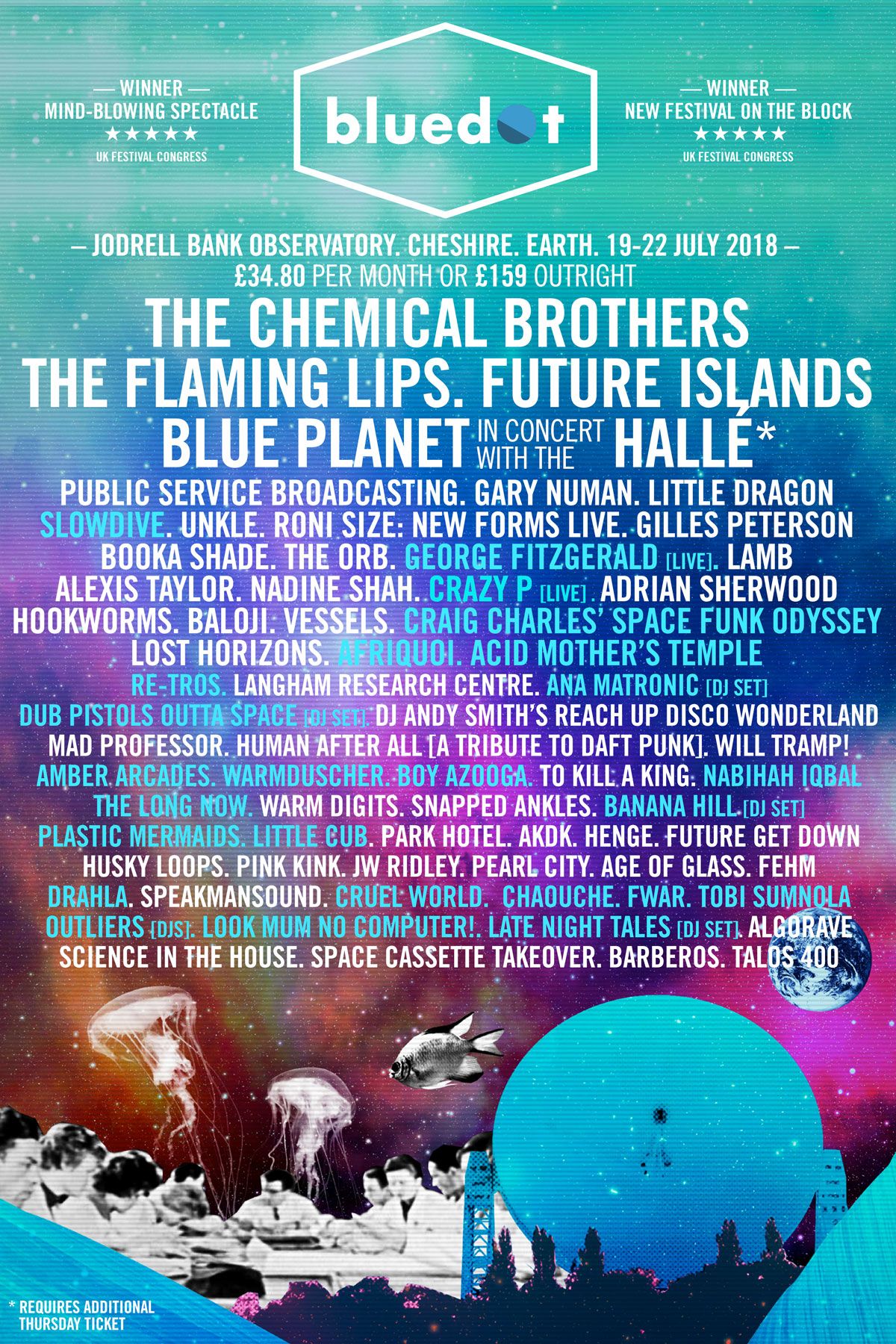 A truly unmissable festival experience set against a backdrop like no other, bluedot continues to expand its stellar lineup for 2018. Today the festival announces a whole host of new names, who join the previously announced The Chemical Brothers, The Flaming Lips, Future Islands, The Halle and many many more, all adding to the weekend of deep space discovery and out of this world music at Jodrell Bank Observatory this summer.

One of the most influential dream-pop bands of all time, outside-indie radicals Slowdive are back and bigger than ever, and are announced today to join the bluedot lineup. After parting ways in the 90s, the now reformed 5-piece have achieved cult status and are a welcome addition to bluedot this summer.

A leading name in the electronic and dance music worlds, George FitzGerald is also added to the bluedot bill today. Championed by the likes of Zane Lowe and BBC 6 Music, the DJ and producer is set to release his hotly anticipated second album ‘All That Must Be’ in March. With 2018 is shaping up to be a huge year for FitzGerald, his appearance on the bluedot stage is sure to be a summer highlight. The brains behind one of the best dance music shows on the planet, Crazy P are also set to take over the decks this summer, and will no doubt have audiences up on their feet with their infectious and eclectic blend of house, disco and soul, and party-starters Bugged Out (who have played host to Daft Punk, The Chemical Brothers, Erol Alkan and more), are set to take over the Mission Control stage for an out of this world dance extravaganza.

Renowned for its unique programming, this year bluedot is proud to reveal that a handful of artists will be presenting bespoke concepts created especially for the festival – with funk and soul legend Craig Charlesperforming an explosive Space Funk Odyssey set on the Mission Control stage, while family favourite brass-and-bass dons Dub Pistols present their Outta Space DJ set, curated exclusively for bluedot 2018. On the culture side of the lineup, the wonderfully outrageous Scissor Sister and all-round superstar Ana Matronic will not only be taking to the decks over the weekend, but also hosting The Future Then panel talks – a series of one-off conversations inspired by the 50th anniversary of Stanley Kubrick’s 2001: A Space Odyssey.

With science, art and culture at the heart of the bluedot experience, this year’s festival will act as a hub of awe-inspiring and educational talks, lectures and discussions for the whole family. Announced today areRick Edwards and Michael Brooks, who will bring a live version of their popular book Science(ish), while scholar and philosopher A.C. Grayling will explore big questions such as the meaning of life among incredible talks from Blast Theory artist Nick Tandavanitj, sound artist Jana Winderen, and lots lots more.

With bluedot dedicated to bringing amazing science to the masses, The Gadget Show’s Dallas Campbellwill presents his hilarious ‘Ad Astra! – An Illustrated Guide to Leaving the Planet’ alongside physicist and broadcaster Professor Jim Al-Khalili, who asks the question ‘Does Life Need Quantum Mechanical? The emerging science of quantum biology’.

Also appearing over the bluedot weekend are Associate Director of the Jodrell Bank Centre for Astrophysics Tim O’Brien, Tamsin Edwards (lecturer with the Open University in Environmental Sciences and a defining voice in the climate change debate), and Alice Eldridge (cellist, researcher and educator who brings her ‘Learning to Listen to Biodiversity’ to bluedot this year). Also announced today isDr Sheena Cruickshank (Senior Lecturer in Immunology at the University of Manchester), who joins previously announced talks from writer and broadcaster Professor Alice Roberts, physicist and engineer Libby Jackson, biologist and conservationist Professor Dave Goulson, astronaut Suzie Imber and astronomer Stephen Wilkins.

In the shadow of the Lovell Telescope, one of the world’s most iconic research instruments, bluedot will explore the latest scientific discoveries from outer space and our planet. There will be talks from world-class scientists and thinkers, discussion of key issues such as climate change and the exploration of space, combined with an opportunity to ask the Big Questions of leading researchers. All backed up by a full family-friendly programme of hands-on science experiments and interactive shows. The truly unique venue is a 30 minute drive from Manchester City Centre, 10 minutes drive from Manchester Airport, and 2 hours from London on the train via Macclesfield.

Full weekend camping tickets are now on sale and start from £159 outright cost or a £34.80 payment plan. Our boutique camping offers a vast and varied selection of luxury accommodation options for those who prefer an extra touch of comfort.

The full bluedot programme will be announced in the coming months. For more information and to purchase tickets, visit: www.discoverthebluedot.com