Producer, DJ and creative director Boston Bun today releases his self-directed video for ‘Don’t Wanna Dance’, a visual that challenges our attention span in the digital age. The France-born, London based Ed Banger certified artist focuses on old school house dance movement in the creative, whilst experimenting with a 1 take visual and different strands that unfold as the video progresses.

“Creating Circa 99 was a way to satisfy my hunger for new music and bring it all together on one label. It’s a place where I can let my creativity run free, and work without boundaries. I felt like producing music was quite limiting, and as I was creating and directing videos before, I started to make my own artwork, promotional videos and apparel. I want to create an atmosphere where people are triggered visually and sonically. For ‘Don’t Wanna Dance’ I had the idea of a one-shot video of multiple layers, and I’m very happy with the result. I hope people dig it and discover something new every time they watch it.’’

As well as creating his own videos, Boston launched label Circa 99 off the back of his success at Ed Banger Records (Justice/Cassius), with a flurry of releases including ‘Paris Groove’ and ‘Missing You’, which racked up over 10 million combined streams and received support from Diplo, Mark Ronson, Annie Mac and Danny Howard.

Boston has signed artists and close friends to his flourishing label, releasing records from Boogie Vice, You Man & Jerge, Samaran and Ryan Playground, as well as launching Circa 99’s merch range, with his ‘Disco T’ selling out in a day, another design coup from the creative force.

Respected throughout the industry for his remix capabilities, Boston has reworked massive tracks for the likes of Cassius, Disciples, and Mark Ronson, with Ronson inviting Boston to play at his famed Club Heartbreak in Paris. If you’ve got to the bottom of this PR, we hope you’ve got to the end of the video.

To find out more about Boston Bun, go to: 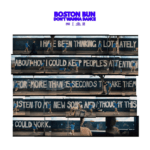