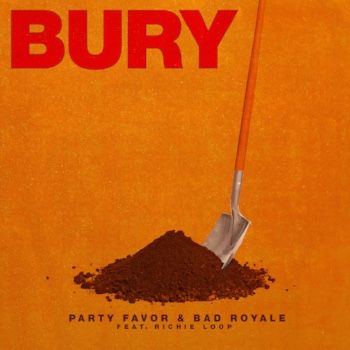 With heavy drums and a rumbling bassline, the high-tempo build-up of “Bury” leads the way to an immensely intense drop, full of raging festival trap; a genre that has become Party Favor’s signature sound since his meteoric rise. Featuring the vocals of Jamaican reggae artist Richie Loop, the track showcases the highly polished production skills of both Party Favor, AKA Dylan Ragland, and American production group, Bad Royale.

The latter are no strangers to collaborations, having previously worked with the likes of Steve Aoki, Diplo and Skrillex. The California group, inspired by Major Lazer, have performed at notable dance festivals such as Ultra Music Festival, Electric Zoo, and Tomorrowland, and earlier this year saw three of their Above & Beyond covers released as singles thanks to a partnership between Anjunabeats and Mad Decent.

Few acts have the innovative color and diverse repertoire of Party Favor, one of the fastest rising names in dance music. His edgy style has helped turn heads across the globe thanks to chart topping original records such as ‘Bap U’ and ‘Booty Loose’ (Mad Decent). Party Favor's highly anticipated Party and Destroy EP, was released last summer and included collaborations with Dillon Francis, Gucci Mane, Sean Kingston, Rich The Kid, Gent & Jawns and Georgia Ku. The EP received rave reviews in the industry debuting at #2 on the iTunes Dance album charts. The EP's lead single ‘Give It To Me Twice’has garnered over 8 million plays on Spotify. Adding to that success, the breakout track from the EP, “In My Head,” landed a #1 on US Dance Radio and reached #6 on Billboard's Dance Radio Airplay Charts.

Party Favor’s infectious music has created massive demand across the globe, leading to consistent headlining tours around the world at some of the best and most iconic venues. ‘Bury’ is the physical embodiment of this in-demand producer’s dynamic sound, and is set to drop on Area 25 on September, 29th.