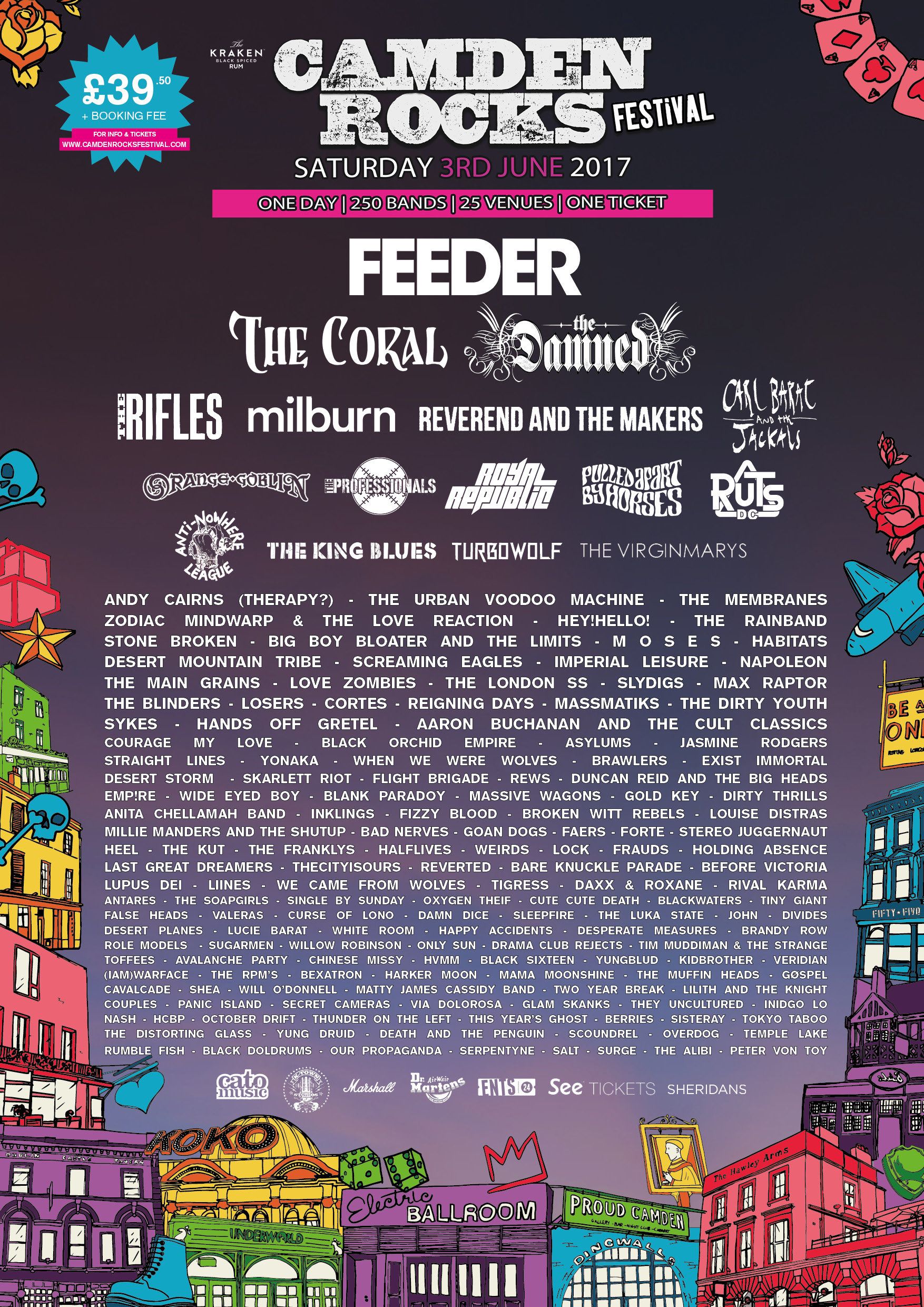 Today Camden Rocks Festival confirm Swedish rock giants Royal Republic and Leeds’ Pulled Apart By Horses, who just released their new album ‘The Haze’ to high praise from the likes of Kerrang, Q, Upset Magazine, DIY, NME, Uncut and many more, will join the 2017 line up this June 3rd.

Camden Rocks Festival 2017 is the biggest and best value multi-venue all-day music event of the UK festival calendar. Progressively expanding each year adding new venues – 2017 will take place across 25 of Camden Town’s legendary music venues, now including Koko – and feature 250 bands, it’s become the annual highlight for many in the London locality, and far beyond.

With near 100 more bands and artists still to be announced, this year’s headliners include the likes of FEEDER, The Coral, The Damned, Milburn, The Rifles, Reverend and The Makers, Carl Barat & The Jackals and many more topping the 250-band-strong bill, together with some of the country’s finest up and coming new acts.

Camden Rocks’ previous years have seen special performances from a range of internationally acclaimed artists and prospering new bands including The Cribs, Funeral For A Friend, Bullet For My Valentine, Creeper, Slaves, Yuck, Heck, Billy Bragg, Ginger Wildheart, …And You Will Know Us By The Trail Of Dead, Gnarwolves and many more.

Festival organiser Chris McCormack – formerly of Creation Records-signed quartet 3 Colours Red – promotes Camden’s best club nights all-year round under the Camden Rocks Presents moniker, putting on over 300 gigs each year, scouting the country’s finest new talent to showcase alongside some of the biggest names in rock, indie and punk at Camden Rocks Festival every year.

“The festival is a total celebration of what Camden is all about as the creative hub of the UK music scene,” he adds. “The clubs and venues here have been, and continue to, host some of the now-biggest names in music in their fledging stages. In the past we've had Catfish & The Bottlemen playing the Barfly to 100 people. So many great bands have cut their teeth here and it’s a pleasure to continue to fly the flag high for new, up and coming bands alongside the big names each year.”

Alongside Pulled Apart By Horses and Royal Republic, further new names announced to join the line-up today are noted below in bold:

The current line-up for Camden Rocks Festival 2017 is as follows:

All tickets to the fifth year event in 2016 sold out and 2017 looks set to be no different. £39.50 tickets are now available from the link below subject to booking / transaction fees.