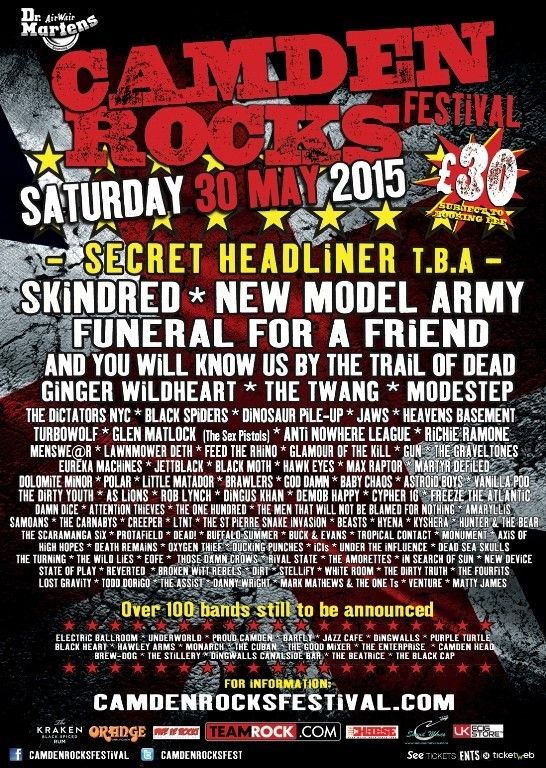 More acts have been added to the bill for 2015’s huge Camden Rocks Festival, taking place on Saturday 30th May across Camden’s historic live music venues. Renowned for allowing fresh new talent to rub shoulders with some of the music world’s most established acts, the organisers of Camden Rocks are excited to be able to announce that Welsh radical rockers Skindred have confirmed their addition to the bill.

“On Behalf of Skindred I can honestly say that we are honoured to be playing Camden Rocks,” claims singer Benji Webbe. “We are bringing a killer set and we will be hitting harder than the rest and playing for keeps! Skindred Bigger Sound Dred Sound.”

Also joining the bill this year will be London based genre-pushing electronic rockers Modestep.  “We’re really excited to be playing Camden rocks!,” admits Josh Modestep. “Camden is and always has been a huge influence on our music, it’s great to be coming back again to fill it with bass, sweat and loud noises!”

Also announced this week and joining the already eclectic and thrilling line up are: The Twang, Gun, Hawk Eyes, Astroid Boys, Those Damn Crows, The Dirty Truth and Todd Dorigo.

The line-up already includes big names in rock, metal, punk and indie including Funeral For A Friend, …And You Will Know Us By The Trail of Dead, Ginger Wildheart, The Dictators NYC, Heavens Basement, Black Spiders, Dinosaur Pile-Up, Turbowolf, Anti Nowhere League, Richie Ramone, Menswear, and Feed The Rhino.

With more big names, including a very special secret headliner still to be announced, Camden Rocks is a steal with tickets are priced at just £30 + booking fee, available now from: www.camdenrocksfestival.com.