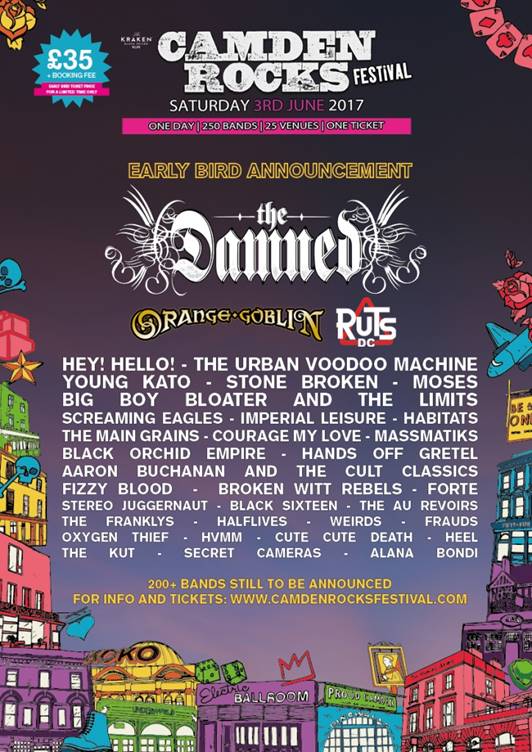 Following a sold-out fifth year in June 2016, Camden Rocks Festival has today announced the first names for the 2017 line-up. Punk legends The Damned, stoner rock giants Orange Goblin, and The Ruts DC are the first to be revealed from the bill.

Set to host over 250 bands and artists across 25 of Camden Town’s revered venues this June 3rd 2017, Camden Rocks are also proud to announce that legendary Camden venue KOKO will join the 2017 festival.

Festival organiser Chris McCormack says, “We’re ecstatic to have such a legendary punk band like The Damned playing Camden Rocks Festival this year, they were one of the first bands I saw play live up in Newcastle, and a band I’ve seen more than any other – a huge inspiration.”

“As always, this year will be made up of all the best high-energy guitar bands we can get our hands on, along with all the best new bands we find through our Camden Rocks Presents shows we put on throughout the year in the lead up. Even I’d buy a ticket for this!”

Ahead of their headline set at the Electric Ballroom, The Damned’s Captain Sensible reveals, “Camden Market is partially responsible for the sartorial disaster that is Captain Sensible, as I've purchased more stage clobber there than anywhere else. And Camden was punk central in the 70s too so in some respects The Damned playing Camden Rocks is a return to the scene of the crime. We'll probably time-warp the set list to reflect the 40th Anniversary of punk, so expect a lively one!”

“It must be the most vibrant of local festivals in London,” adds Segs of The Ruts DC “loads of great bands and loads of lovely people bringing even more life to the heart of Camden Town. Having attended, enjoyed and played as guests in various bands over the years, The Ruts DC are very excited to be playing Camden Rocks in 2017 in their own right!”

“Orange Goblin are absolutely chuffed to be a part of Camden Rocks Festival 2017!” – vocalist and guitarist Ben Ward adds. “Camden has always been our musical home since the very early days, playing at venues like The Dublin Castle, The Monarch and the old Barfly, right through our career to places that have become like a second home to us, such as The Underworld and The Electric Ballroom. Camden is still the epicentre of the London music scene and Camden Rocks showcases the very best bands from all styles of music. Next June we will be bringing our brand of heavy metal thunder to The Electric Ballroom, along with hundreds of other bands across every venue and turning Camden into THE place to be, again, no matter what your musical tastes may be. See you there!”

Super-early-bird tickets for Camden Rocks Festival 2017 sold out immediately. £35 tickets are now available from the link below subject to booking / transaction fees.