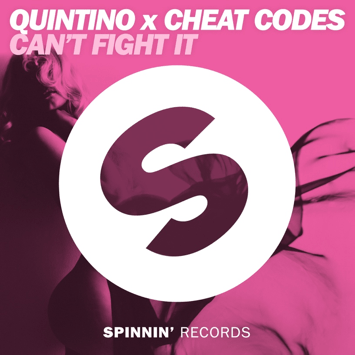 Dutch powerhouse Quintino teams up with LA based Cheat Codes on their new collaboration ‘Can’t Fight It’. Hot vocals by Cheat Codes combined with an uplifting beat, where pop & dance intertwine.

Dutch DJ/producer Quintino’s success has grown massively in the last couple of years, making him a world-renowned player in the dance scene. One of his most recent tracks ‘Freak’, together with R3HAB, peaked at #2 in both Beatport’s Top 100 and House chart. Earlier this year he received a YouTube award for exceeding the 100K subcribers.

For his new single ‘Can’t Fight It’, Quintino teams up with Cheat Codes. “When I first heard the vocal, I was blown away. It’s super nice to work with these talented guys, super excited for this release.”, tells Quintino.

The LA based trio recently released their single ‘Sex’, together with Kris Kross Amsterdam, which vaulted #10 on Spotify, went Top 20 in 20 countries, and racked up 100 million-plus streams and 10 million YouTube views and counting. “’Can't Fight It’ is about being super into somebody despite how many games they play. You know your love for them is real, and their love for you is scattered and inconsistent. It's one of those situations, where from an outside perspective, you'd think it's obvious that you should let that person go and move on. But from a personal perspective, you can't get enough.”, explains Trevor from Cheat Codes.