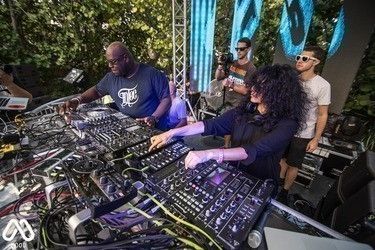 On 18th August Nicole Moudaber’s remix of Carl Cox ‘Kommen Zusammen’ will be released on his Intec Digital label. This offering also marks Nicole’s fifth Intec appearance and the latest in what’s now a long-standing working relationship between her and Carl.  To preview the EP see below

Nicole’s weekly In the MOOD Radio show is increasingly popular and is now available in over 27 countries worldwide including Radio FG in Belguim and France, Slam FM in the Netherlands, Vicious Radio in Spain, Vibe FM in Romania, Kiss FM in Portugal and many more.

The DJ Awards has finally confirmed the 2014 Categories & Nominees and for the second year running Nicole Moudaber has been nominated in the ‘Best Techno DJ’ category which is a fantastic achievement. There are also 12 Special Awards that are selected by a panel from the music industry and will also be presented at the ceremony. Voting is now open, and please visit www.djawards.com or www.facebook.com/DJAwards and you may vote for Nicole here. The ceremony for all the winners will take place on Tuesday 30th September at Pacha Ibiza.

MOOD Records continues to go from strength to strength with Just Be, Stacey Pullen, Anja Schneider, Carlo Lio and Carl Cox all appearing on the label in the last twelve months. The next release is by Swedish techno veteran Joel Mull and will be released in September. Head to soundcloud to keep up to date with everything the label is doing: https://soundcloud.com/moodrecords

Having already played a six hour set at Cacao Beach Club in Bulgaria, Dance Valley Festival in Holland and Paradise at DC10 this month, Nicole is gearing up for the rest of a busy August with a number of key gigs. These include playing all night long with Carl Cox at his Revolution night at Space Ibiza on August 19th, the SW4 Festival afterparty on August 23rd, Stereo in Montreal on August 31st and more. Please see below for a full list of gigs: