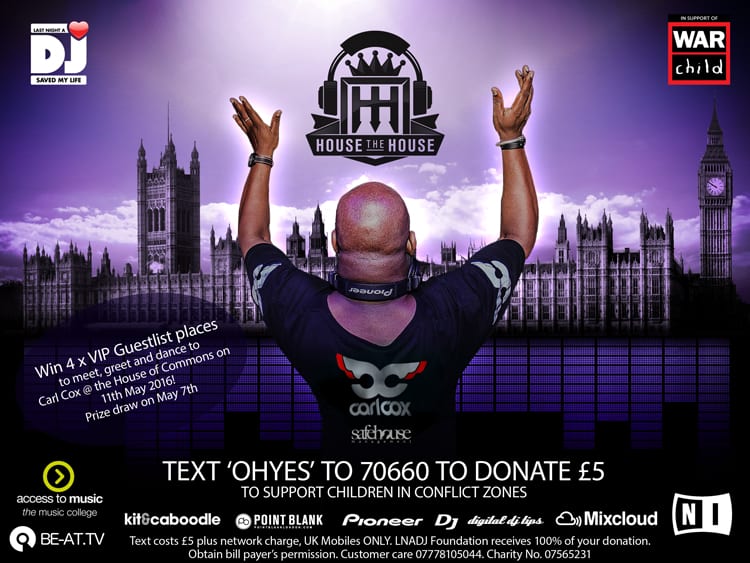 Carl Cox has launched a text to donate initiative with charity music foundation Last Night A DJ Save My Life (LNADJ) in support of children in conflict zones via War Child, the charity supporting  children affected by war.

The 3-month text message donation scheme encourages supporters of Carl, LNADJ and the dance music community as a whole to give £5 by texting ‘OHYES’ to 70660. The funds raised will be given to War Child to support some of the world’s most vulnerable children, affected by the world’s worst conflicts in the Middle East, Afghanistan and Africa An initial prize of 4 VIP guestlist places to meet, greet and dance to Carl Cox at the House The House event at the House of Commons will be randomly selected from every donor of the scheme. The text campaign winner will be drawn on 7th May 2016. The ‘OHYES’ text to donate initiative is also offering a number of prizes up to the closing date July 7th. See link for terms and conditions.

The winner of the grand final of ‘Last Night a DJ Saved My Life’ (LNADJ)’s ‘House The House 2016’ DJ competition, held on April 30th at Work Bar in Islington, is Holly Louise https://www.mixcloud.com/HollyLouise/. The 19-year old from Nazeing, Essex, will be the first female and youngest DJ to play in the House of Commons.

6 regional finalists competed to win a place to play alongside dance music legend, Carl Cox, at the House of Commons on Wednesday 11h May. The initiative aims to raise money and inspire the UK dance music community to champion a positive contribution to children in conflict zones across the world. For those not lucky enough to attend the event, you can follow all the action on the night with BE-AT.TV <http://be-at.tv/>. Anyone wishing to attend the House of Commons event, there are 75 limited guest spaces by donation .

The regional heats were held in 6 UK cities and supported by the education partner, Access to Music; an educational body that develops creativity and vocational ambition via relevant engagement and guidance within the music industry.  The organisation has provided training to thousands of musicians across the UK.

The competition invited budding DJs between the ages of 14 and 24 to enter and support children in conflict zones around the world by simply raising sponsorship and registering as a House the House campaign fundraiser via the dedicated Virgin Giving page.  All entrants were invited to upload their mix on the LNADJ hosted Mixcloud page.

Jonny Lee, Founder of LNADJ says: ‘We are incredibly proud to host this initiative – raising funds by getting young people engaged through their love of music. The entries have been amazing this year, so we are looking forward to hearing them and finally seeing the winner play alongside Carl Cox on May 11th.  Should be an unforgettable evening!’

The event follows the ground breaking launch of ‘House the House’ in 2013, when Fatboy Slim and competition winner Bryce Fury made history by becoming the first DJs to play in the House of Commons.

Full information on how to enter can be found on our websites: