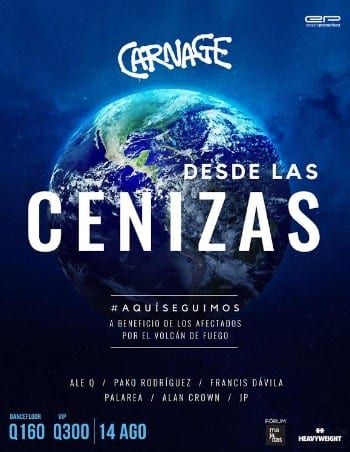 International DJ and producer Carnage has unveiled a special charity event Desde Las Cenizas(Spanish for “From The Ashes”), in aid of those impacted by Volcán de Fuego, one of the most active volcanoes in Central America.

A native of Guatemala City himself, Carnage stated that the welfare of his country has been on his mind since the disaster, which has seen over 300 people remain missing after the volcano erupted, killing at least 116. Nearly 13,000 people have been evacuated from their homes.

"I’ve been working on this show since the day this tragedy happened,” added Carnage. “I promised myself and my family that I would take action.”

Presented by Empire Promotions and the DJ’s own Heavyweight Records label, the event will take place on August 14th at Forum Majadas in Guatemala City. The producer will be joined by a wealth of local artists, including Ale Q, Pako Rodriguez, Francis Davila, and many more.