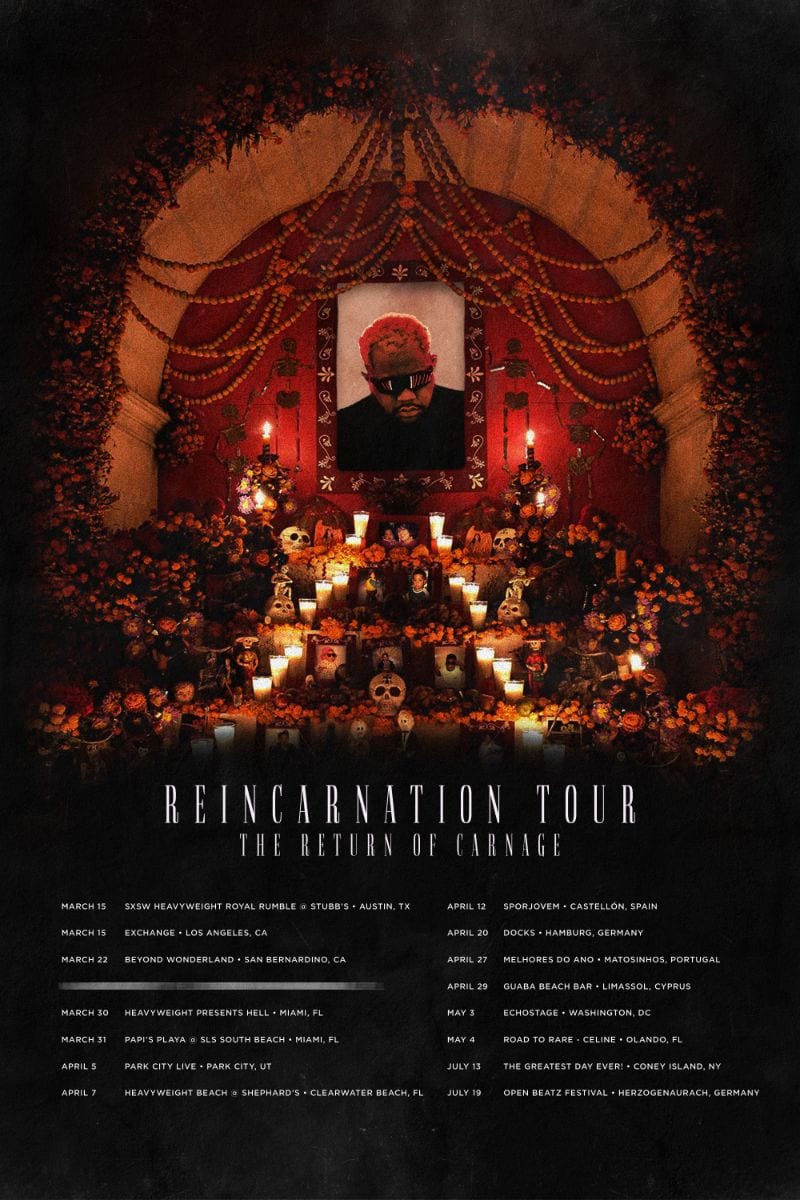 After announcing his hiatus from the music world last November, international DJ and producer Carnageis back! The Heavyweight Records founder (real name Diamanté Anthony Blackmon) will embark on a run of global dates aptly titled ‘The Reincarnation Tour’.

In a powerful op-ed on Billboard, Carnage cites the untimely deaths of his good friends Avicii and MacMiller as a major factor in his own decision to take some time out of the spotlight.

“I needed to take time to think about what is truly important to me,” Carnage reflects. "I needed to slow it all down and really focus my life and career. It is not easy to share, but I desperately needed a reset.”

Carnage’s 2019 revival sees the trap titan approach his work with a brand new and re-energized vigor. Kicking off at SXSW with another edition of Heavyweight Royal Rumble on March 15th, Carnage will return to Los Angeles that night for his eagerly anticipated headline show at Exchange.

Partnering with the iconic Los Angeles-based soul food restaurant Roscoe’s House of Chicken and Waffles, Carnage will be hosting a unique pop-up experience for fans. From 10pm to midnight, each ticket holder to the Friday, March 15th Exchange show will receive free Roscoe’s at the venue.

Joining the billing for Insomniac’s Beyond Wonderland festival in March, Carnage will also take part in Miami Music Week, before heading to Europe for a run of shows across spring/summer.

A true giant of the music industry, Carnage has racked up hundreds of millions of streams across his platinum-selling hits, scoring widespread acclaim on his two studio albums, Papi Gordo (2015), and Battered, Bruised & Bloody (2018). Collaborating with the likes of G-Eazy, Lil Pump, Migos, Steve Aoki, KSHMR, Timmy Trumpet, and many more, Carnage has also proved his hand as a remixer, including his infamous rework of Hardwell’s hit “Spaceman”.

Known for his explosive live shows, Carnage has delivered his unrivaled energy to many of the world’s biggest festivals, including Coachella, EDC Las Vegas, Tomorrowland, and Ultra Music Festival in Miami, where he was joined on stage by DJ Khaled, Rae Sremmurd, Wiz Khalifa, and Rick Ross.

After taking time off to recharge, travel, and spend time with family, Carnage is ready to unveil a new era of music to his fans. "I worked on music in a way I never had before,” he says on Billboard. "For the first time in as long as I can remember, I was making music that meant something to me. I was not trying to make hits. My new music is unlike anything I’ve ever made…it has real emotion.”

As a proud immigrant, Carnage is also prepared to tackle issues facing the world today: “I am going to use my platform to be a better role model and help all immigrants like me achieve success. You're going to see a difference in me and I can’t wait for the ride to come.”