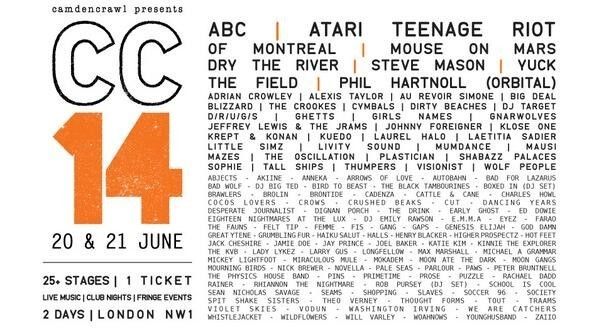 And now what you’ve all been waiting for…..with the line-up complete and only one short month until CC14 celebrations kick off at the height of British summer time, we are pleased to release not one, but TWO FREE invaluable festival warm ups to ready you for the 2014 Camden Crawl weekend on the horizon.

FREE CC14 APP FOR ANDROID & IPHONE AVAILABLE 23RD MAY 2014
The Official CC14 App is the ultimate way to experience the Camden Crawl festival this summer. Taking place 20-21 June 2014, CC14 hosts more than 200 cutting edge artists, special guests, comedy events and club nights across 25 London NW1 venues. With so much to take in and discover, the app gives you the opportunity to listen to & learn about all the amazing artists on the line up prior to the event. It also provides a full schedule of performances viewable by artist, venue or time and allows you to select favourites, create a customised schedule and set reminders well in advance of the festival. Upon arrival at CC14, the app’s GPS map displays your current position amongst the venue locations and line ups and includes ‘on now & next functionality’. For those who want to share their festival insights and experience pre, during and post event, the app is completely integrated with Twitter, Facebook and Instagram. It also includes up-to-date news & announcements via push technology, full festival information, ticketing and quick links to various festival promotions.

DOWNLOAD THE FREE APP FROM GOOGLE PLAY, APP STORE OR VIA OUR MICROSITE:
http://www.oneevent-oneapp.com/camdencrawl-2014/

CC14 ALBUM RELEASED FOR FREE DOWNLOAD IN ASSOCIATION WITH 7DIGITAL
As tradition has is it and one of its original USPs, Camden Crawl has delivered a free compilation to festival goers every year since its inception. Starting out as a series of vinyl 7”s and graduating to CD in 1995, the compilation eventually evolved to digital download in 2008 courtesy of long term Digital Download Partners 7digital. This year’s edition of the annual ‘Official Camden Crawl 2014 Album’ is as genre defying and unpredictable as its predecessors. Featuring more than 70 tracks from a selection of artists performing at June’s CC14, the album is a sonic rollercoaster ride which delves deep into the leftist of electronic fields, rises to the heavenly harmonies of Britain’s brightest new songwriters, bounces off the walls of edgy punk rock and jumps back to the beat of London’s latest urban sensations.

7Digital offer millions of songs through a global network of web stores that are lovingly maintained by regional music experts. Any music purchased on 7Digital.com is stored securely in a ‘cloud-based locker’ which can be accessed from anywhere.

CC14 FESTIVAL INFORMATION
CC14 festival takes place across the Summer Solstice weekend on June 20 – 21 2014 and is set across more than 25 independent venues, outdoor spaces and beer gardens for this year’s live music & club marathon. The event spans a two mile stretch of NW1 & NW5 and will play host to over 250 emerging live artists & DJs, special guests and fringe events presented by an esteemed panel of curators throughout the festival.

The programme of events runs from 3pm each date into the early hours of the next morning. Tickets are to be exchanged for wristbands which allow unlimited entry to each of the participating venues and events as individual capacities permit. Ticket price also includes FREE app, programme guide and 2014 compilation album.

This event is for 18 years and older only. Tickets to be exchanged for wristbands and free programmes 14:00–22:00 at KOKO.