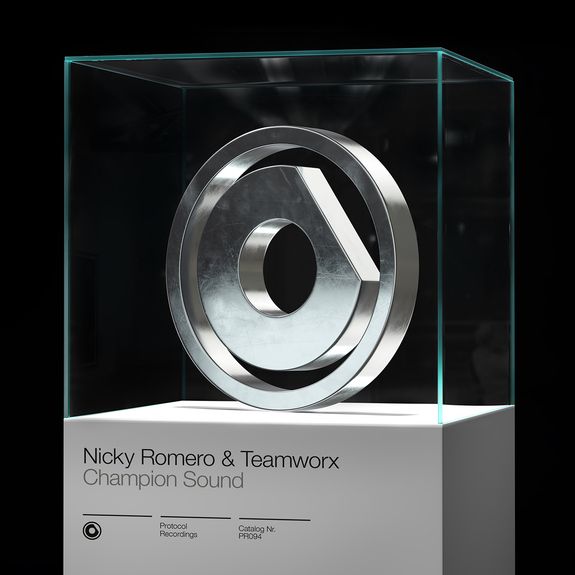 Joining forces for the first time, Dutch maestro and Protocol pioneer Nicky Romero has enlisted the skills of Israel-based Progressive House duo Teamworx for the latest single on Protocol Recordings, ‘Champion Sound’.  As grandiose as the title implies, the release is a fast paced, hard-hitting house track that showcases the heavier elements of all involved artists.

"It’s a really amazing feeling when you get to see an artist grow from release-to-release; it’s one of my favorite parts about running a label.  We’ve put out several of Teamworx's tracks on Protocol over the years and I’m thrilled to finally collaborate with them on this latest record Champion Sound.” – Nicky Romero

‘Champion Sound’ is relentless.  A high energy, fast paced BPM dance track that blasts kick drums and non-stop bass for the first minute, followed by a euphoric, symphonic build-up that evokes listeners emotion before diving deep again, pounding the fast beats home through the rest of the song.

This has been a milestone year for Nicky Romero, celebrating 5 years of growth and success of his Protocol Recordings label.  Nicky is looking forward to celebrating this years’ success of Protocol next month at ADE with alabel showcase, taking place at Melkweg in Amsterdam.  Taking pride in spotting, developing and collaborating with new talent Nicky Romero has curated a label boasting only the best in emerging electro and progressive house prodigies.

Having executed a colossal calendar of relentless touring, Nicky has played all across the globe this year. Having recently completed a tour of Asia with stops in Japan, Shanghai and Taipei, he now looks forward to a huge South American tour with Ultra stops in Brasil, Mexico and Road to Ultra Peru and the Secret Garden Music Fest in Ecuador.  2017 has been busy to say the least for the Dutch dance music legend, but he shows no signs of changing pace with non-stop releases through the course of 2017 and beyond.

Teamworx are no strangers to Nicky’s legendary Protocol Recordings, with their first Protocol feature finding itself on the label’s Miami 2016 compilation.  Since then they have found themselves with the electro legend’s support thrice preceding this milestone collaboration, and will perform alongside Nicky at his ‘5 Years of Protocol’ label showcase at ADE in October.  With the influence and support of Nicky Romero and massive artist growth throughout 2017, including a mainstage set at Tomorrowland, the heavy house duo has limitless potential and opportunities to become champions of dance music themselves.