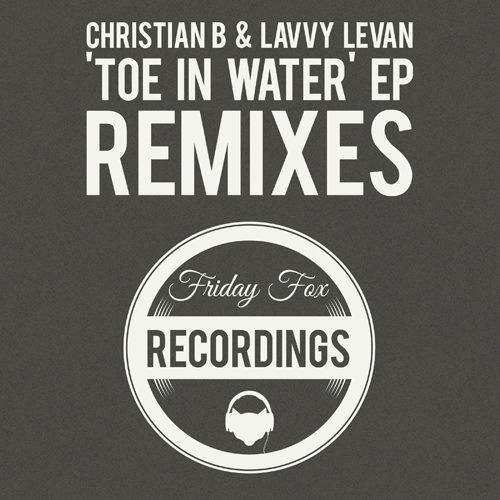 After the successful launch of Friday Fox Recordings earlier this year, Christian B & Lavvy Levan return with a groovy remix package of their brilliant ‘Toe In Water EP’ and a brand new song, ‘Beatroot’. London’s Robot 84 takes ‘Insatiable’ to a new level, injecting unrelenting House music energy, holding down classy groove that rises from simmer to boiling point. Marc Rapson launches ‘Now?’ into the soulful playing field, armed with warm pads and a lovely piano hook, ‘Two Sides’ gets thrown in the mix by deep house guru, DSHunt, who adds a shade of melancholia to his keys, backed by punchy beats. The boys’ brand new song with its humorous title ‘Beatroot’ carries a heartfelt message to “be true to yourself”, from Lavvy, over a subtle platter of catchy vocal hooks and hypnotic 90’s piano flavoured house vibes. Rounding off the package is a nifty radio edit of the fabulous ‘It’s On’.

Christian B and Lavvy Levan have always had music at the core of their friendship. The early days included forrays into Rave and DnB, Pirate Radio sessions among other musical adventures. Musically reunited in 2013, they decided that the time was right to create Friday Fox and give birth to some individual yet accessible dance music and make their mark on the scene. Christian B’s family have a long history in music with his Dad being a prolific musician Russ Ballard, with a career spanning 5 decades. Christian’s environment growing up was always focused around the studio, and it was clear from an early age that music would be his profession and passion. Meanwhile, Lavvy grew up in a house filled with the sounds of Funk, Soul and Disco. As such, the natural attraction to unusual and funky music came early for Lavvy – and he started his vinyl collection at young age.  While Lavvy explored the UK club scenes with his DJ sets, Christian moved into professional studio production writing and producing for Pop Idol and The Voice stars in UK and Germany. He’s also had 5 top tens in the UK and 4 in Germany and was part of the remix team for Christina Aquilera, Leona Lewis, Alicia Keys and Lemar, among others. Christian also produced House music for Stip Records, more recently releasing with Bonnie Bailey on Strictly Rhythm and Fierce Angels. Christian & Lavvy’s paths moved in different directions for a number of years, before re-connecting last year. Both bursting with fresh ideas, they jumped into the studio to write for themselves, emerging with 4 fantastic house cuts, making up the aptly titled ‘Toe In Water EP’ and launching their own label Friday Fox Recordings in early 2014.  Christian B & Lavvy are definitely one’s to lookout for this year, have perfectly positioned Friday Fox to be one of the breakthrough labels of 2014; pushing fresh UK talent.

Robot 84 is London based DJ, Producer & Remixer Scott Ferguson, a connoisseur of House, Disco and Balearic and has been spinning records for the last 20 years. His musical beginnings saw him co-producing key club nights ‘Dogtastic’ & ‘Carbolick Frolick’ in Edinburgh in the mid 90’s. Recently he launched the guise ROBOT84, signed to Secret Life Music with a host of successful releases. His latest work a remix of Balearic classic ‘De Testimony’ by the mighty Fini Tribe for their 2014 resurgence. DSHunt is a House Music / EDM Producer from the Southeast of England. His passion for Deep House and Nu Disco have shaped the way he creates melodic sounds, with strong catchy riffs and profound soulful vocals. His original music is extremely recognisable which permiates across his Remix projects. UK producer, remixer and keys wizard Marc Rapson has remixed tracks for Deborah Jordan (Futuristica), Scrimshire (WahWah45), Bennson (Raw Fusion) and Atjazz (Mantis) and has also re-worked tracks by Marvin Gaye and Sarah Vaughan, receiving recognition from Gilles Peterson. Marc’s live work has seen him travel to New York, Tokyo and tour Europe as well as appearing on Later with Jools Holland with Ben Westbeech (Breach). He currently splits his time between the studio, gigging and tutoring at the Hertfordshire College of Music.