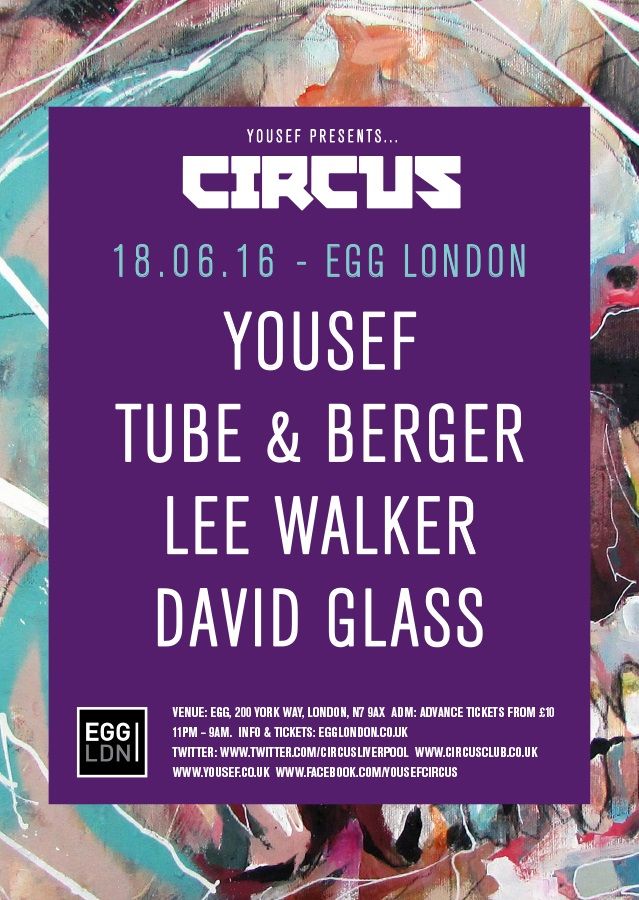 Yousef’s Circus event series have become synonymous with showcasing the most eclectic artists from across the underground music spectrum. Whether it be curating line-ups of the industry’s premiere names or giving new acts a platform to
shine on, it is without question that the brand has set the benchmark as to how clubbing should be experienced. Returning to London on June 18th, EGG will see yet another phenomenal set of artists descend on it’s DJ booth featuring the likes of Tube & Berger, Lee Walker, David Glass and of course, Yousef. Hailing from Germany, electronic duo Tube & Berger have swiftly soared to the top of dance music’s hierarchy mesmerizing dance floors across the globe with their unique blend of house and techno. No strangers to performing on UK soil, 2015 saw them put in some pivotal performances at the likes of We Are FSTVL, SW4 Festival and of course Arts Club for Circus back in May. Away from the DJ booth the duo have had outstanding success with their own label Kittball ran alongside fellow DJ’s, Juliet Sikora and P.A.C.O. The label not only provides a platform for them to release their own tracks but boasts an impressive array of productions from artists such as Jay Lumen, Ida Engberg and Timo Maas to name a few. A truly versatile act when it comes to their own studio work, Tube & Berger are famed for creating productions from varying styles and influences which have been released across leadings labels such as Suara and Ministry of Sound. Alongside their own productions, remixes have become somewhat second nature to the duo, producing thunderous remixes for the likes of Edu Imbernon & Coyu, Rodger Sanchez, Nice7 and Blonde. Few artists have experienced the meteoric rise to stardom as talent Lee Walker has. Fully embracing the digital age of music and social media, he made his presence known in 2015 when techno heavy weights Marco Carola, Loco Dice and Dixon played his edit of DJ Deeon’s “Freak Like Me”. The video of these techno superstars playing Lee’s track quickly turned into a viral sensation. Following on from this triumph, he has received outstanding support from dance music’s finest radio DJ’s Annie Mac, Pete Tong and Danny Howard, leaving people wanting more from the young man from Middlesbrough. Driving forward from last years momentum, he’s now regarded as one of the most promising young artists on the scene. His instant success has triggered a flurry of gig bookings, with Lee finding himself playing across Europe in venues such as Sankey’s Manchester to The Zoo Project Ibiza. 2016 promises to be a huge year for him and the crowd at EGG can certainly expect an up-tempo performance certain to entice the dance floor. A key figure in the Circus camp, David Glass’ synergy with the dance floor is unparalleled making him one of the most gifted DJ’s to come out of his hometown of Liverpool. David’s endeavours when it comes to production are equally as powerful. With a strong of notable releases, his 2014 remix of Carl Cox’s ‘Time For House Music’ is still a firm favourite across clubs far and wide. June 18th promises to be special night as Circus takes over EGG London, providing yet another display of the finest acts from house and techno.