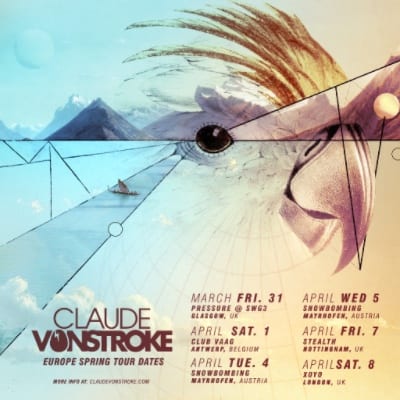 Beginning in Glasgow at SWG3’s infamous Pressure night – ran by Soma head honchos Slam – Claude VonStroke will make his way to Antwerp for a date at Club Vaag before heading to Austria for two immense performances at the prolific Snowbombing Festival. Returning to the UK, the California-based artist will then play Stealth in Nottingham, rounding the tour off in the nightlife hub of London at the world-renowned XOYO nightclub.

The Spring tour is just a slight addition to Claude VonStroke’s extensive touring schedule for 2017 as it comes off the back of a US and Australia road-trip.

An alias that was created over a decade ago, Claude VonStroke – otherwise known as Barclay Crenshaw – has become one of the most well-respected label owners and DJs in dance music. With a slew of credible releases including ‘The Whistler/Who’s Afraid of Detroit?’ EP that cemented his reputation, he has gone on to produce three incredible albums and started a collaborative project with Green Velvet. In addition to his mammoth touring and release schedules, Claude VonStroke hosts a weekly radio show called ‘The Birdhouse’ featuring interviews and guest mixes from the likes of Low Steppa, Soul Clap, Friend Within and Pezzner. Earlier this year, Crenshaw pushed his musical boundaries even further with the release of an experimental hip-hop album under his own name.