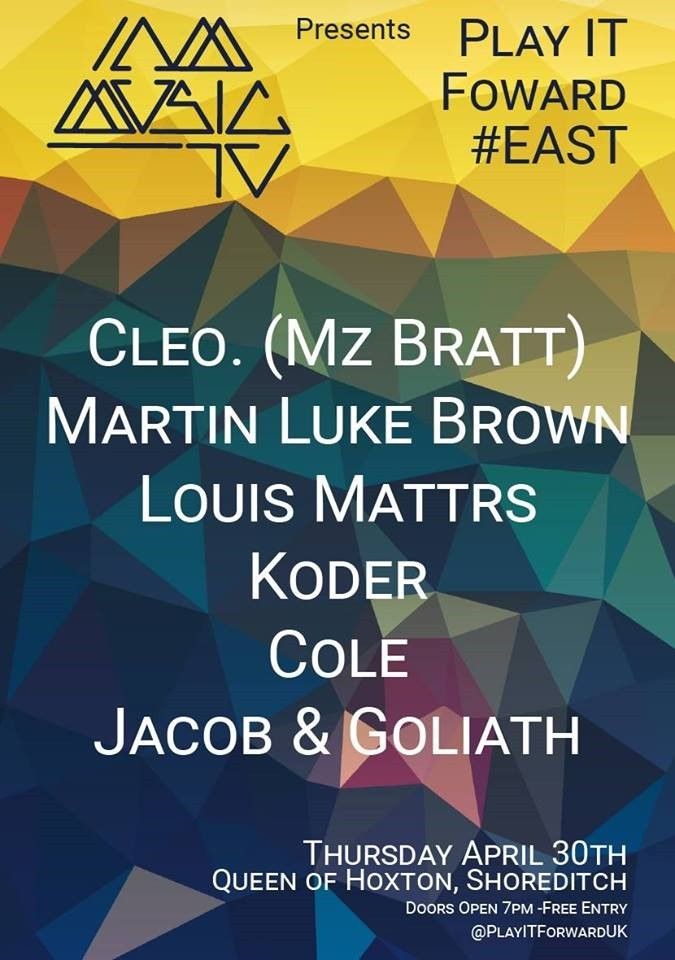 Last month’s Play It Forward #EAST at Queen Of Hoxton was a gig of EPIC proportions. Our headline Mikill Pane tore the house down alongside XO MAN who also caused a riot. We’re back in Shoreditch this Thursday with an unstoppable line up featuring the return of Cleo. (Mz Bratt). The gorgeous London artist will be performing her first show in three years and you can witness her amazing new EP ‘Beauty For Ashes’ live on the night.

Supporting Cleo will be Parlophone Records’ Martin Luke Brown who has just dropped his thriving ‘Take Out Of Me’ EP. Having gained huge support from tastemakers such as Annie Mac on BBC Radio 1 over his debut single. We’re ecstatic about having him back at Play It Forward once again.

Next up, hailing from Brighton, an artist who we’ve wanted to take to the stage at Play It Forward for quite sometime. Introducing Louis Mattrs, his extraordinary pallet of talents will completely blow your mind.

It wouldn’t be a Play It Forward #EAST gig without another indigo child, would it? Koder, a Londoner with a majestic flow which varies between the worlds of grime & hip-hop.

COLE, this lad has a truly remarkable voice. After he uploaded ‘Long Way Down’ to the web, we couldn’t resist getting in contact and sealing the opportunity to catch this track among others being performed live.

Jacob & Goliath are no strangers to the festival season, the duo have rocked many a field across the UK. After premiering a Barn On The Farm session on IAmMusicTV, we decided they were a must to perform.

If you’ve been at Play It Forward before… then you know the drill! Collaborations, jamming, beer and some of the greatest breaking artists you’ll witness anywhere on the planet. It’s a FREE ENTRY gig, so bring all your mates and we guarantee you’ll be the top dawg.

Hosting and DJ’n on the night… Of course, we’re bringing back the two reprobates, we know them as Carly Wilford & Shan McGinley. The only thing left to do is… RSVP on our FB event page and come RAVE with us.

If you missed last month, this is what went down…