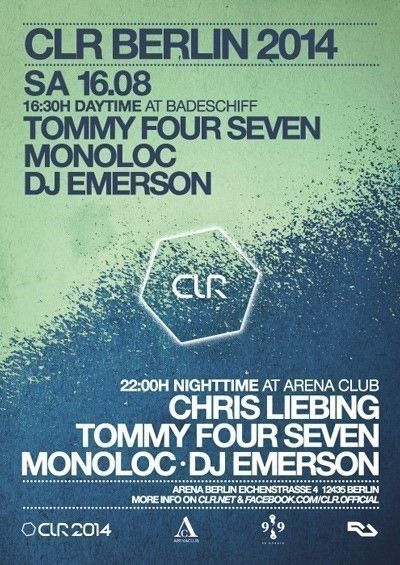 CLR is set to return to Berlin this summer with an event befitting of summer time in the city in which the multi disciplined organization is based. Running for  16  hours  on  16th  August  2014  and  across  two  venues  the  event  has  a limited but none the less heavy weight line up with Chris Liebing, Tommy Four Seven, Monoloc and DJ Emerson all being given the time to fully explore their record boxes.

As ever CLR continues to offer up full multi-sensory experiences. As such CLR Berlin Open Air will make the most of the sunshine with the first eight hours taking  place  in  the  pen  at  Badeschiff  with  Tommy  Four  Seven,  Monoloc  and  DJ Emerson and starts at 16:30. As darkness settles the event will then move inside to Arena nightclub at 10pm where it will run through until 8am.

Create.  Learn.  Realize.  Three  defining  principles  of  one  the  worlds  most recognized  techno  brands.  CLR  is  the  brainchild  of  one  of  the  founding members of the German techno scene, and one of its most celebrated DJs and producers; Chris Liebing. Now a multi-­‐discipline organization that comprises a record label, booking and event agency, CLR has built a loyal global fanbase over the course of its decade existence.