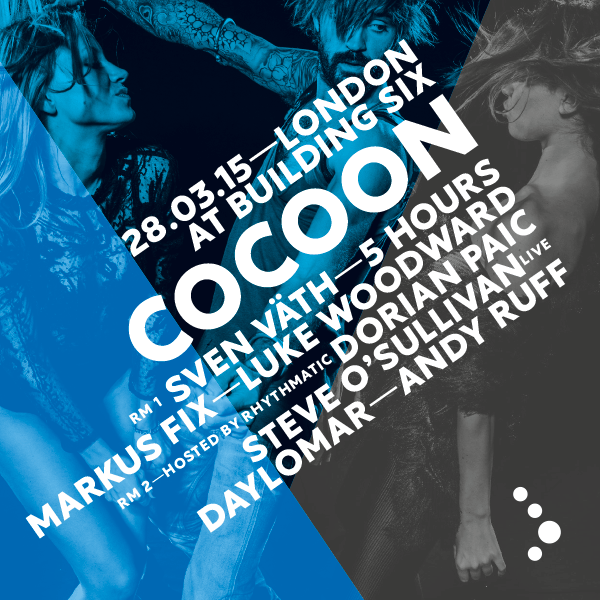 2014 marked a massive year for Cocoon, with Sven’s 50th birthday and15 years of events on the White Isle making it that extra bit special. Londoners were treated with two sold out Cocoon events at Building Six where ‘Papa Sven’ took centre stage at these two Balearic inspired shows. 2015 will see Sven plays an extended 5 hour set in the main room, alongside Markus Fix; plus Rhythmatic are back in for more of the same in room 2.

Few men in electronic music have built up a legacy as far-reaching and influential as Sven Väth has done with his imprint. Never resting on his laurels, he has used the heritage of the brand to propel Cocoon into new directions with the same innovation, passion and hedonism he’s always had. It’s this forward thinking mindset that’s kept them at the top, and has kept their nights in Ibiza as a Mecca for partygoers globally.

Markus Fix has positioned himself at the core of Cocoon’s roster, and is a trusted head within the European club circuit. A global player, Markus has built up a unique Djing style with finesse and good vibrations at the core of what he’s about.

Joining the Cocoon crew will be Rhythmatic who have reverberated themselves through the realms of house and techno.

They’ll be taking over room 2 again on what will be part of their 8th Anniversary Tour With already events confirmed in Greece, Barcelona, Ibiza, Berlin, Bulgaria, Dubai, Wales, Bristol and London.

Tickets:
VIP TICKETS:
– Fast track entry via the VIP & guestlist queue
– Access to the only cocktail bar in the venue
– Access to the Sky Walk viewing platform
– Private toilets
– Unreserved luxury seating booths
– Your own private cloakroom (less queuing) on the top floor (not free – just to avoid confusion.