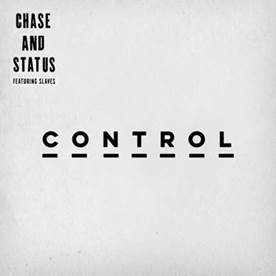 ‘Control’ was Annie Mac’s Hottest Record on her Radio 1 show last night. The video for the track was filmed in London and directed by Henrik Hansen, going live directly after the play. As usual, Chase & Status have been working with the very latest technology, and have launched the world’s first “Bullet Time” teasers.

‘Control’ is the first track to be lifted from CHASE & STATUS’ forthcoming fourth studio album, due for release later this year and features NME award winning primal punk-rock duo Slaves.

Ahead of their forthcoming album release CHASE & STATUS are confirmed for Radio 1 Big Weekend on 27th May.

Primal punk-rock duo Slaves are Laurie Vincent (Guitar, vocals) and Isaac Holman (Drums, vocals), one of the UK’s most in demand live acts renowned for their fierce and chaotic shows. 2015 saw the band release their hugely acclaimed debut album, ‘Are You Satisfied?’ a colourful, funny and often riotous riposte to the dreary mood of Austerity Britain. The record crashed in to the top 10 and subsequently received a Mercury Music Prize nomination. Currently writing their second album, the Kent duo are also about to embark on their first U.S tour.

‎Described by Spin Magazine as ‘Nothing short of megastars’, CHASE & STATUS are one of the most successful British bands of the past decade. ‘No More Idols’ – the follow-up to their ground-breaking critically acclaimed debut album, ‘More Than Alot’- was the second best-selling UK album by a British band in the year of its release, spawned seven A list Radio 1 hit singles, and achieved double platinum status. Their third studio album, ‘Brand New Machine’ debuted at no. 2 in the albums charts, and brought their career record sales tally to over 3.5 million. Globally renowned for their production and writing skills, the Brits nominated and Q and NME award winning duo have remixed for the likes of Jay Z and The Prodigy, had six tracks on three of Rihanna’s smash hit albums, and written for Snoop Dogg.

Universally acclaimed for their phenomenal live performances, CHASE & STATUS have embarked on tour after tour throughout Australia, North America and Europe, with their last tour in the UK seeing them headline arenas (including a sold out 02) and play to over 80,000 people. Having perennially headlined festival stages (from Glastonbury and Reading through to Global Gathering) CHASE & STATUS have played countless festivals worldwide to date. 2016 will see Chase & Status make a number of other festival appearances worldwide over the summer (to be announced shortly).