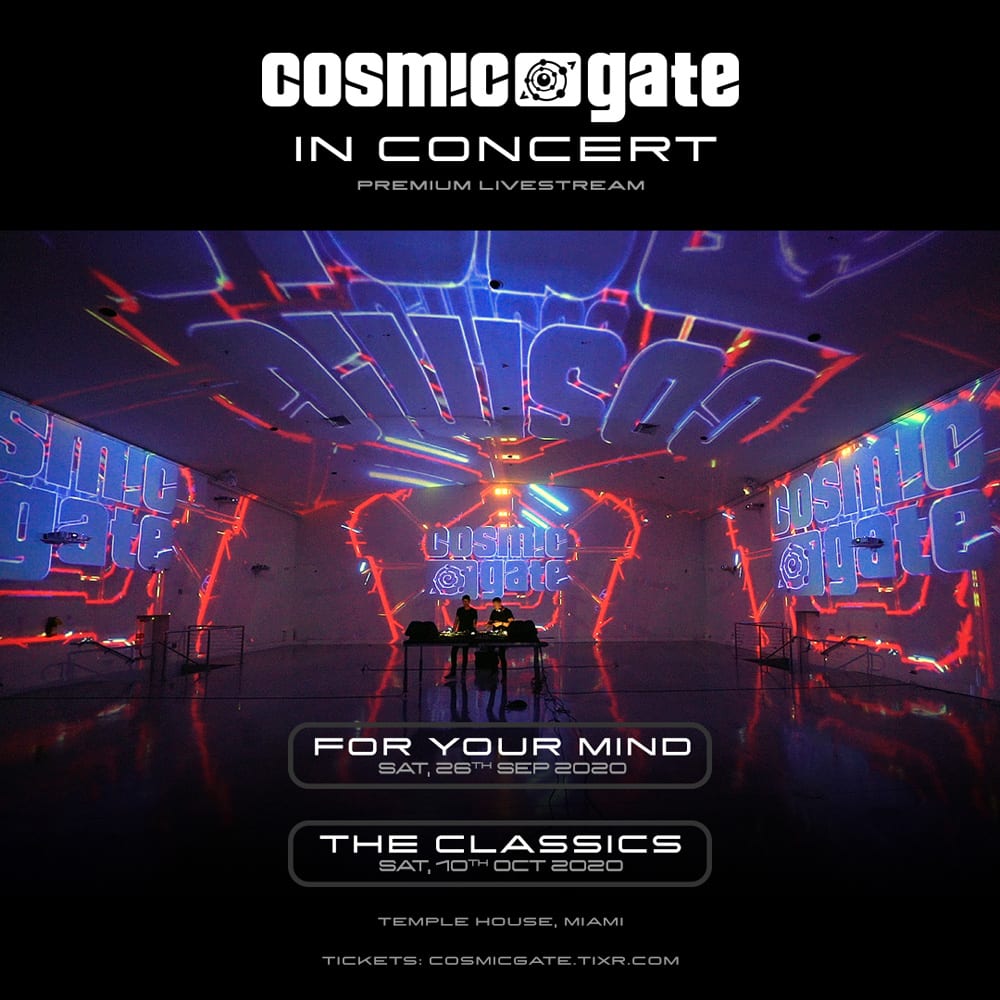 In October though, Nic & Bossi will go beyond the simply groundbreaking to take premium-livestreaming to its zenith. Long story short: if you can’t come to Cosmic Gate, Cosmic Gate are gonna come to you. And better yet, in the comfort of your own home! CG will perform two concerts from Miami’s The Temple House dream-factory – a place where the only real limitation is the artist’s imagination. Globally recognised and award winning for its 360-degree projection mapping, the venue will host the concerts in their digital environment, delivering shows the exact likes of which have never been seen before.

On Saturday October 3rd, Cosmic Gate will perform For Your Mind – a two-hour concert, backed – or more accurately mapped – by retina wowing, purpose-created visuals. Featuring a wealth of new and exclusive CG-composed music, each track will be accompanied by its own thematic take-you-there graphics. Music featured will include new Cosmic Gate & Andrew Bayer collab ‘The Launch’, as well as the CG remixes of Andrew Rayel’s new single ‘Everything Everything’ and their exceptional take on Joe Smooth’s endlessly hope-filled ‘Promised Land’. Also playing their part will be recent CG releases ‘Universal Love’ & ‘Your Mind’, and the desk-hot latest & greatest from trance music’s highest-achievers. Two weeks later on Saturday October 17th Nic & Bossi will be back with their second concert The Classics (more details of which will follow). You can check out this amazing teaser video and catch a glimpse of what’s in store here (youtu.be/kDMY4BV3kAU).

Living in different cities and unable to meet during lockdown has been a surreal experience for two artists accustomed to spending 50 weekends a year together. The concerts will be the first time Nic & Bossi have spun together in six months, doubtless adding an extra level of expectation to the performances.

Nic says: “naturally we hold out hope that the current situation doesn’t rule out every event for the rest of 2020. Like many though, we don’t like the way it’s looking”. Bossi continues: “we live to play for our fans and if we have to be creative to do that, that’s what we’re gonna do. So we’re doing two unique events that’ll allow us all to club ‘apart-but-together’ in the absolute mask-free safety, and with the added thrill that we’re going to be able to take you hundreds of ‘places’ we otherwise couldn’t!”

Talking about the venue, Nic continues: “The Temple House is a place where – digitally – our wildest ‘wanna-play-there’ dreams come true. So for two Saturdays in early autumn, push back your couch, zoom up the brightness (& volume!) and join us for some shows that’ll bring us together for an experience we’ll never forget!”

Tickets for Cosmic Gate In Concert are $9.99 USD for each show or $15.99 USD for both events, with limited early bird tickets (at a 20% discount rate) available now through cosmicgate.tixr.com . You can find regional streaming times for the show below, which will also be available to watch/re-watch video-on-demand-style two hours after their first broadcast.

Tixr’s live chat will also be enabled, allowing you to talk with friends locally and internationally throughout the show. Limited virtual meet & greet tickets are also available, allowing you and other fans from around the world to video-chat to Nic & Bossi just prior to concert time. The site’s also carrying a limited edition merchandise line featuring a dedicated t-shirt, Cosmic Gate In Concert flag and CG’s most recent album, ’20 Years: Forward Ever Backward Never’.

Cosmologists: its time for us come together as one and make livestreaming special again! Cosmic Gate bring the party to your place October 3 and October 17. More details at cosmicgate.tixr.com 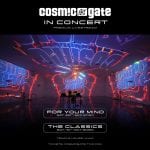