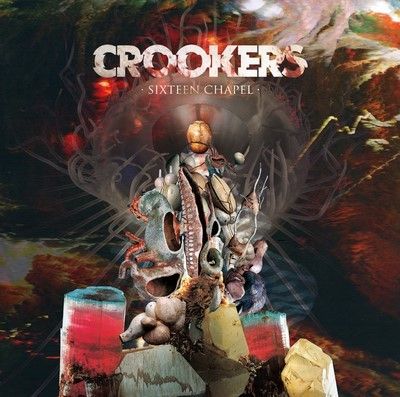 Crookers, aka Francesco ‘Phra’ Barbaglia, returns with his third artist album Sixteen Chapel, out on Ciao Records March 3. Recently revealing album tracks “Dangerous feat. Midnight” and “Belly Button Tickler feat. Mr. MFN eXquire”, Crookers continues to showcase his ability to create fearlessly innovative club tracks focused firmly on the dancefloor. After all, as Crookers tells THUMP, “The only thing I know how to do is have fun – I never take things too seriously.”

Stay tuned for more tracks from Sixteen Chapel to be unveiled, including features from Jeremih, TJR, Zombie Nation, Antwon, STS and more. Also catch Crookers as he hits North America this March and April (see dates below).

Previously described by Pitchfork as “one of the more promising examples of an ongoing cross-pollination between the club and “the club,” Crookers remains one of the most prominent DJs working today. Achieving his first major success in 2008, Crookers’ remix of Kid Cudi’s “Day ‘N Nite” reached top 20 in 21 countries, top 5 in 6 countries, and twice platinum in the United States. 2010 saw the release of Crookers’ debut album Tons of Friends, which featured an all-star lineup that included the likes of Miike Snow, Pitbull and Major Lazer. The 2011 follow up, Dr. Gonzo, proved to be another step forward for Phra, as he once again showcased his ability to produce catchy club beats without compromising his originality.

When he’s not busy performing for sold out crowds or working with some of the biggest names in music, Phra splits his time between his two record labels: Lucky Beard and Ciao Records. Looking for a way to explore the limits of his profession while working with his friends, what started as a passion project has turned into one of the best sources for underground music available. With artists such as Anubi, Digi and Stabber among the current active roster, all signs point to Lucky Beard and Ciao Records continuing to be industry leaders far into the future