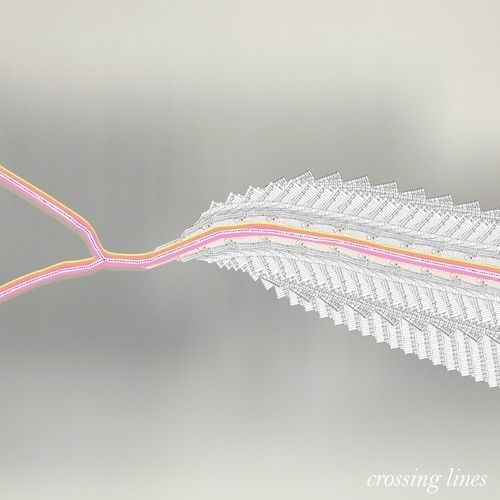 The highly anticipated debut release from South London label NX Records is a collection of brand new music carefully hand-picked from a selection of artists based in the New Cross / Deptford area of the capital. Earlier this year the new label was launched at an event at London’s Southbank Centre alongside the release of a free mixtape showcasing some of the sounds that were to follow with the coming official NX releases, the first of which is this compilation, Crossing Lines.

NX Records is a joint venture between Matthew Herbert’s Accidental Records and Goldsmiths, University of London in which students and alumni from the University’s music department become actively involved in the release of new music, not just as musicians but also in all aspect of the process including legal and administrative. With recent alumni including James Blake, Katy B, as well as members of Nigel Godrich’s Ultraista and Portico Quartet to name but a few, the music coming out of Goldsmiths has been undeniably both exciting and forward-thinking.

On Crossing Lines we hear an amazingly broad and rich blend of music styles from the alt folk inflections from Jamie Coe and James Marples to the bruised electronic soul of Machines and Niomi Eve. UK producers Thefft and King Of Hearts offer up intricately programmed beats whilst the slow burning beauty of Holy Milk’s ‘Born and Die’ and the sublime offering from These Ghosts hints at post-Radiohead tendencies. Clearly Goldsmiths is producing competent, confident musicians and there is a complex musical architecture prevalent throughout this outstanding debut album.

This is no standard label compilation however. The artists featured have also been involved in the process of making and presenting the project, from the details of the packaging to the setting up of the label as well as a series of forthcoming events. October/November even sees a pop-up record shop on the New Cross Road that will feature in-store performances from the artists. It doesn’t have the romance of spitting at gigs but in many ways, this is the new punk – artists taking control of their own work, bypassing many of the structures within the music business that for so long have corrupted and exploited the creative act for nefarious purposes.

Matthew Herbert says: ‘a new generation of musicians aren’t waiting around for some mythical A&R person to discover them and make them a star, they are making it happen on their own terms, both creatively and in business. I’m proud that NX is a new kind of structure that empowers and enables them rather than ties them up in knots chasing the next big single. Most importantly, and unsurprisingly of course given the history and context of Goldsmiths, the music is brilliant – a statement of intent that the NX generation is coming and it’s doing so on its own terms ”