The video serves as a memory of hardships and a reminder of strength in love. The trend-setting Western Sydney duo’s visuals was filmed and edited by up-and-coming Sydney videographer, Aaron Bull. Aaron has previously worked with artists’ including Yungn Lips, OTG, Pistol Pete & Enzo, Jaecy, Lil Spacely, Yibby and more, and was also responsible for the visuals to Cult Shφtta’s previous single, ‘My Ways.’

Amongst the chaos of the last six months, Cult Shφtta have manage to showcase the beauty of Australia amidst raging bush fires and severe floods. Director Aaron Bull displays Cult Shφtta’s surroundings changing, coinciding with the evolution of emotions happening throughout the song.

Beginning with shots of barren, dry land (heartbreak/emptiness) followed by the destruction of the floods (letting guards down) then ending with wildlife returning and unknowingly, for the last time before the pandemic hit, celebrating together with friends representing re-kindling love.

Proving themselves as one of the most outlandish and trailblazing artists’ coming out of Australia, the duo are currently collaborating on music with artists’ including Creed The Kid (Brisbane) and Hideyoshi (Japan). A world-takeover set firmly on their minds, last year they performed in Thailand, at Atlantis Water Festival, and also reached 194k views on their single with local Thai MC, NGAZ YB.

On a constant journey to showcase original sounds & styles, Cult Shφtta’s latest offering showcases that they won’t be slowing down any time soon. The single has been featured by trusted taste-makers such as I Am Hip Hop Magazine, FBi Radio, Dopecausewesaid and more. Alongside major playlists for Urban Flavour, The Drip, Local Hype and New Music Friday on Spotify AU/NZ. 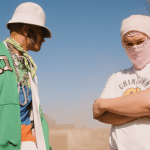