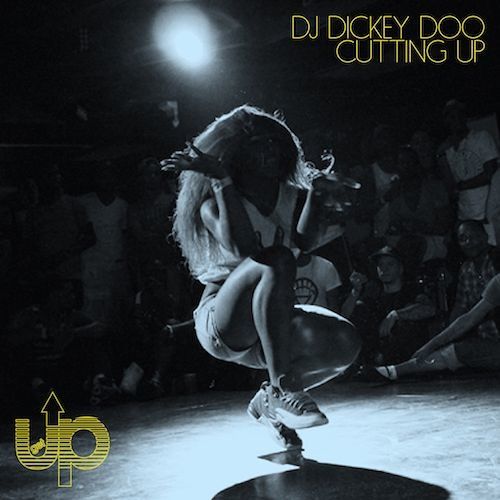 Get Up Recordings’ second release of 2016 is “Cutting Up (feat. DJ Lina)” from DJ Dickey Doo. This release is jam packed with remixes from Christy Love, Rennie Foster, and SOLLORS.

Over the last two decades, DJ Dickey Doo has established an international reputation, from headlining the Castro Street Fair in San Francisco, to Wigstock in New York, to Horse Meat Disco in his home base of Berlin, and has played with legends such as Derrick Carter, Chez Damier, and Little Louie Vega. On the production front, he released his first solo album Nocturnal Adventures under the moniker DixMix in 2004 and has collaborated with artists including Eddie Amador, Larry Tee, Tyler Stadius, and even punk veterans S.N.F.U., and remixed R.E.M, Peaches, and Light Asylum. “Cutting Up” is a ’90s strut dance floor pounder; big drums, big keys, and a big bass line really pump this track. The first version, the Dickey & Snax Original Mix, has additional golden touches from producer Snax and features NYC and Fire Island’s legendary DJ Lina, who adds her sultry vocals to the track. The second version, The Rhythm Mix, is a flowing dub of the original.

Get Up Recordings label co-owner Christy Love lends her skillful hand in the remix department. Ms. Love is a NYC DJ, producer, and, of course, label owner. She has DJ’ed alongside legends such as Derrick Carter, Cajmere, DJ Pierre, and DJ Heather. She also has a string of underground original hits on her own label, the last being “Internal Waves”, as well as remixes for a grip of artists. Her take on Dickey’s track cleverly pieces together a bit of the original and The Rhythm Mix versions and rhythmically moves them along making it a thumping dance floor filler.

The next remix is from Rennie Foster, who hails from Canada and has an impressive and prolific resume, ranging from being one of the Top 50 DJs in Japan to having releases on Transmat, F-Communications, and Rebirth. Rennie’s musical background started long ago as an early pioneer of the hip-hop / B-Boy movement in Western Canada. From there he moved to Tokyo where he has played clubs such as Womb, Yellow, and ageHa. In addition to running his own labels, RF and RF Trax, he has has remixed artists such as Swayzak, Altern–8, DJ Bone, Alain Ho, Deepchild, John Beltran, Juan Atkins, Orlando Voorn, DJ 3000/UR, and has been remixed by a who’s who of house and techno music such as James Zabiela, Claude Young, Rodriguez Jr./Youngsters, G-Pal, Gabriel and Dresden, etc. He also had a hit in 2011 with “Savior” featuring the late Detroit legend Aaron Carl on vocals. His musical knowledge comes to life in his remix of Dickey Doo’s track, which is bathed in a lovely acid groove, making it killer for the underground dance floor peak hour.

The final remix comes from SOLLORS, who is one of the hardest working DJs to come out of Vancouver. Influenced by the ’90s rave scene in his teen years, SOLLARS picked up and traveled the globe, which only added to the cultivation of his sound. His first EP, Nerve on Prison Entertainment, made noise on Beatport’s NuDisco chart, reaching the 6th spot. He also has forthcoming releases on Toolroom, Nervous, Caballeros, and Jungle Funk Recordings. His remix of “Cutting Up” is a mesmerizing filter house jam for all.