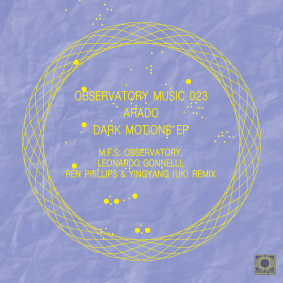 Cologne based talent Arado has been an artist of note since the release of his debut ‘Uganda Express’ EP on Loco Dice’s iconic Desolat imprint back in 2009. Since then, the German artist has gone on to release a string of EPs via the likes of Riva Starr’s Snatch!, Moan, and Moon Harbour to name just a few, finding favour amongst some of the industry’s biggest names in the process. Following a recent return to Hector Couto’s Roush Label, he now reveals his latest work via M.F.S: Observatory’s Observatory Music imprint, offering up two original cuts alongside three impressive remixes from the label owners themselves, Leonardo Gonnelli and Ren Phillips & YINGYANG (UK).

Title cut ‘Dark Motions’ opens the EP as a medley of rich pads combine with a bubbling acid line, before second original cut ‘Two Nights’ raises the tempo slightly as slick percussion loops go to work amongst bright chords and infectious vocals. Leonardo Gonnelli’s interpretation of ‘Dark Motion’ signals the arrival of the first remix, with the Italian producer accenting the original’s murky dynamics with organic percussion shots and resonant kicks, whilst label bosses M.F.S: Observatory employ warped vocals alongside sharp, metallic drums. Last up, emerging artists Ren Phillips & YINGYANG (UK) up the energy as they showcase their high-octane style and move firmly into the peak time with their remix of ‘Two Nights’.