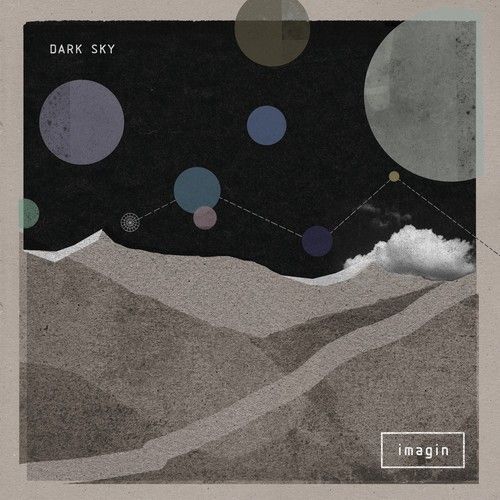 The long awaited debut album from Dark Sky is not entirely what you might expect from the London trio. After a string of club focused 12″s they delve deep to deliver a tender and uplifting offering entitled ‘imagin.’ To the sworn fan it may come as a surprise, but it will prove to be a pleasant one, as the evolution from the analogue metallic sounds that shaped their past discography naturally mature and slide into the sound palette of their debut long player.

Through heavy consumption of music from across the spectrum the trio’s work has refined, and clearly echoes their heritage as kids of the 90s, referencing numerous influences the decade processed – the album bears traces of funk, post rock, a thick layer of trip hop, even balearic house, bossa nova, disco, 80s pop and ambient. All of it heavily reverberated, stirred and shaken in Dark Sky’s musical tumbler.

The outcome is captivating. Littered with sophisticated percussion, soft and subtle marimbas fused with sci-fi synths and tastefully delivered vocals throughout. Grey Reverend features on the lead single ‘Silent Fall’ to beautiful effect, with an outcome sitting somewhere between James Blake and Moderat. Elsewhere Cornelia (of Portico Quartet fame) delivers Elizabeth Fraser – like vocals on ‘Nothing Changes’, ‘Vivid’ and ‘Purple Clouds’ providing a perfect soundtrack to the late summer.

Long standing Dark Sky fans will also be pleased to hear that there are more club- orientated tracks on here too. ‘Odyssey’s’ dark spacey arpeggios and growling bass line reminds us of their seminal electro-roller ‘Confunktion’, but comes delivered complete with euphoric almost balearic stabs and straight stacked 4 x 4 hi-hats. ‘Rainkist’ is a soul laced dance floor ballade featuring vocals from an unlikely source in the form of d-Bridge with huge crossover potential and ‘Manuka’ finally brings back the breakbeat with its percussive far-east vibes that evoke Truth Hurts & Rakim’s ‘Addictive,’ which fittingly sums up this album.