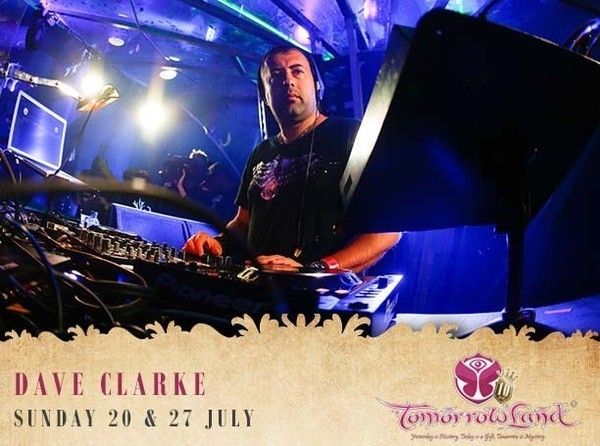 Dave Clarke returns to Tomorrowland for the 10th anniversary edition to host the 2nd largest stage for not one but two Sundays, alongside some of the leading names in techno.

Entrusted with a stage for a third year, techno anarchist Dave Clarke will showcase his undying passion for techno to a sold out crowd of 360,000 people from 220 different countries, with special guests including Green Velvet, Heidi, Seth Troxler, Marcel Fengler, Octave One (Live), Vitalic (Live) and many more!

“I am extremely proud to be given the opportunity to oversee and host the second biggest stage at the world’s most successful dance festival for two Sunday’s, this year I believe we have a perfect balance of good quality Techno and look forward to seeing you all there.” Enthuses Dave.

FULL LINE UP FOR EACH SUNDAY;
(artists listed alphabetically)

ABOUT TOMORROWLAND
This year over 400 artists will once again be appearing on the various colourful stages that have been constructed in the spectacular festival park De Schorre in Boom. For three whole days, 180,000 visitors will immerse themselves in a magical world. The fairytale decor, gigantic dance valley, incredible fireworks and the best DJs in the world will provide an experience like no other. The 10th anniversary of Tomorrowland is being celebrated with a double edition: held on both 18-20 July and 25-27 July.

The festival that started in 2005 as a one-day event already had its first edition on foreign soil in 2013: TomorrowWorld in Chattahoochee Hills (Atlanta, Georgia). 140,000 visitors found their way to this magical site in the United States. The originally Belgian festival will once again be living The American Dream this year when the festival is held there for the second time on the last weekend of September 2014. www.tomorrowland.com