David Guetta – What I Did For Love (Quentin Mosimann remix) 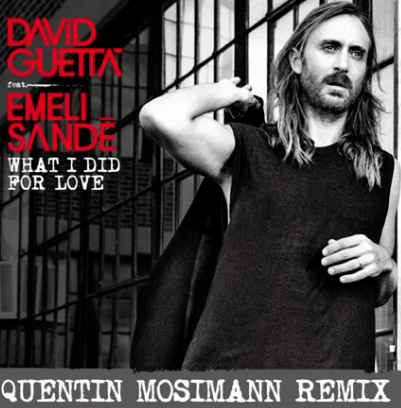 David Guetta – What I Did For Love (Quentin Mosimann remix)

Following the release of the latest single from David Guetta ‘What I Did For Love’ ft. Emeli Sandé — superstar French superstar Quentin Mosimann has created a huge new remix of the track, which is released today.

Joining Vinai, Teemid and Morten on the remix package, French producer Quentin Mosimann’s re-working of the track stands out from the crowd with it’s colourful, skippy tones and huge basslines that give ‘What I Did For Love’ bags of energy, loaded up for the dance floor.

About Quentin Mosimann
Quentin Mosimann has stamped his mark in the music industry as one of the new DJ/ Producers emerging at the forefront of the electronic music scene. Propelling himself into the spotlight, Quentin scored a double gold record in 2009 and was crowned Best French DJ at the Fun Radio European DJ awards 2014.

Hitting number 72 on the DJ Mag Top 100 DJ’s last year, he’s also been a coach on Belgium’s version of The Voice two years running and his podcast, House Bless You attracts 100,000 downloads a month on iTunes.