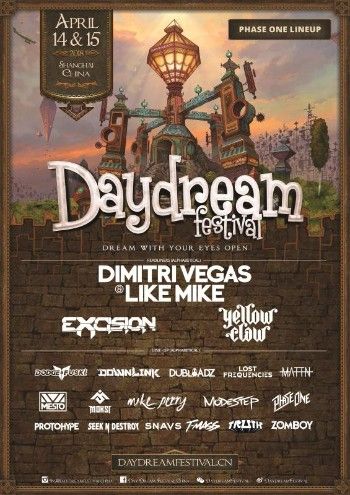 Since 2010 Daydream Festival has been a purveyor of magical landscapes allowing festival-goers the chance to participate in their out-of-this world fantasies that transcend standard festival experiences. After taking their dreamy vision on a journey to Mexico and Spain, this extravaganza of light and sound continues to permeate worldwide. With the latest installment seeing Daydream take their enchantment halfway across the world from its birth in Belgium to China for the inaugural Daydream Festival China on 14th and 15th April in Shanghai; hosting the biggest DJ’s on the planet making up the festival’s billing.

With the announcement of the festival’s Phase-One line up, Daydream Festival China is marking its stamp as one of the leading festivals in the Chinese dance scene. Welcoming a plethora of the electronic scene’s biggest known stars, alongside some of its most exciting emerging new talent, all of which are set to descend on the two-day festival that runs on Saturday 14th and Sunday 15th April in Shanghai.

Headlining the Phase One announcement for day one, and taking centre stage on the main arena, are renowned festival juggernauts Dimitri Vegas & Like Mike. The Belgium duo has previously ignited main stages everywhere from Creamfields and Electric Zoo NY to EDC Las Vegas and EXIT festival, as well being anointed the undisputed Kings of Tomorrowland, the iconic global festival sensation. Having delivered a string of hit singles in recent times from standout tracks, such as the collaboration with Ne-Yo on ‘Higher Place’, ‘Stay A While’, ‘Hey Baby’ with Diplo and their single ‘Complicated’ with David Guetta and Kiiara (currently on 80 million Spotify streams), Daydream Festival goers can be assured the brothers will be delivering the biggest hits for the expectant Shanghai crowd!

Fellow festival headliners include Dubstep, monster Excision, who has collaborated with major names such as Pendulum and Bassnectar, which have been a seminal figure in the rise of dubstep over the years. Whilst Dutch duo Yellow Claw, who have cemented their footprint across Asia these last few years and has worked with everyone from T-Pain and Gucci Mane to Steve Aoki and DJ Snake, will be bringing their unique blend of sharp-toothed trap and bass hits to the Daydream Festival masses.

The festival showcases its diversity in abundance with a wide spectrum of top tier names to complete the Phase One line-up unveiling. Additional festival guests include the chart-topping sensation Lost Frequencies, who to date has amassed over 1 billion streams with his music and his new single, a collaboration with Zonderling, titled ‘Crazy’ has already clocked up 35 million streams. Also appearing on the line-up are Modestep, who have had recent releases on Diplo’s Mad Decent and Steve Aoki’s Dim Mak. Swedish DJ Mike Perry is also included, notable for his chart hit ‘The Oceans’ and who recently remixed ‘Perfect’ taken from pop superstar Ed Sheeran’s latest album ‘Divide’. Add to the list of names one of the biggest names in bass Zomboy, as well as Dodge & Fuski, Downlink, Dubloadz, MATTN, Mesto, Phase One, Protohype, Seek N Destroy, Snavs, T-Mass, Truth and Barong Family and all round bass-house heavy duo Moski, and the result is a smorgasbord of sound, ensuring fans across the many facets of electronic music, from the darker to the more melodic, are catered for. Prepare to be mesmerized and swept away in equal measure ahead of further announcements, as the dreamy vision for the first ever Daydream Festival in China becomes a musical reality!

For event and ticket information check: