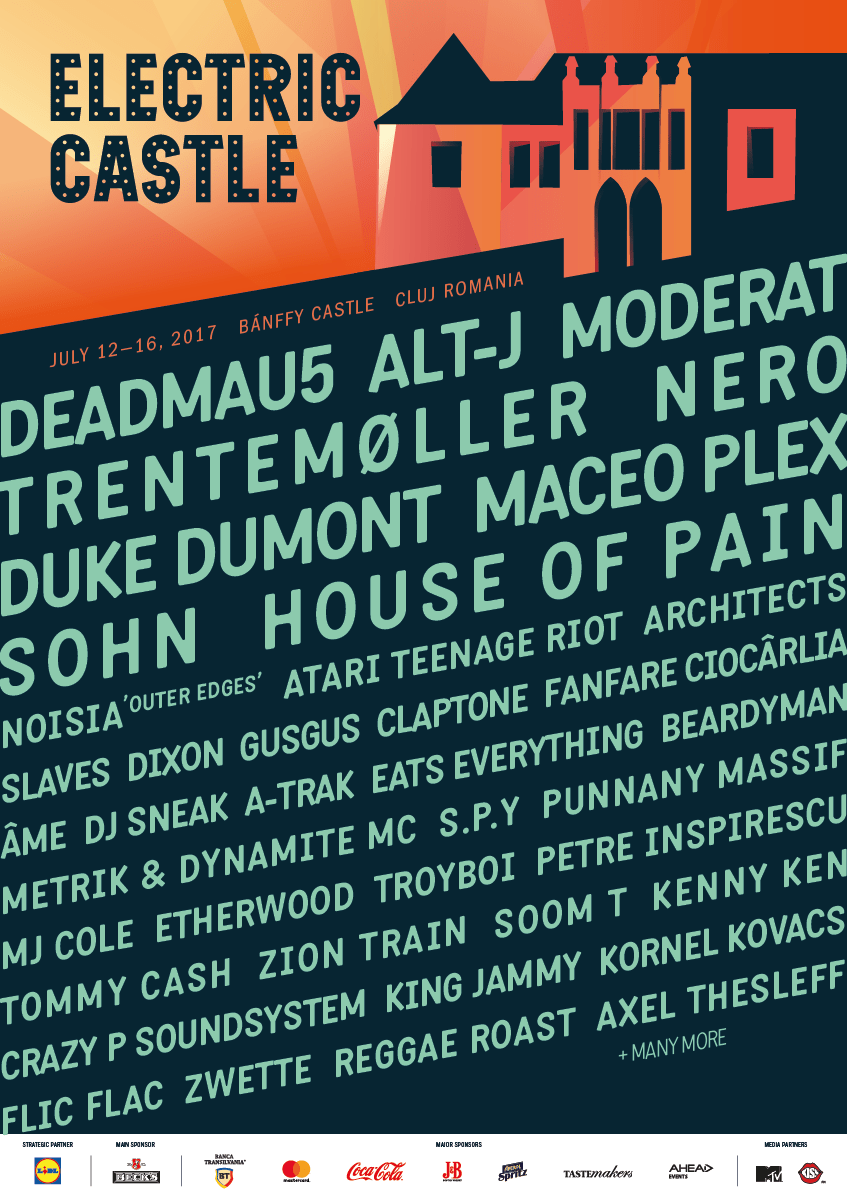 One of the only festivals to be set within the walls of a 15th century castle, Romania's Electric Castle is a festival that incorporates music, technology, art installations and performing arts in a five day hedonistic adventure. The second announcement sees Deadmau5, Duke Dumont, House of Pain, Slaves, Atari Teenage Riot, Tommy Cash alongside Trentemøller, Maceo Plex, Eats Everything, MJ Cole plus more added to the bill. With seven stages to fill, Electric Castle will see over 130,000 people gather in this iconic location for one of Europe's few 24 hour festivals. Beyond the music, revellers will be able to experience a huge food offering, barber shop, yoga classes, cinema, fashion corner and much more. The festival takes place from 12th – 16th July and tickets start at an incredibly affordable £68 via Festicket.

Electric Castle is a unique experience, shaking up the way people interact with music, technology and art. This visually stunning festival will feature 3D projections, secret party areas along side a tech park hosting the latest gadgets for party goers to experience for free. New this year, Electric Castle will feature various TEDx Talks during the day with standup comedy sessions, street theatre and music production workshops on a new performing arts stage.

Deadmau5 will headline with his unmistakable big room house sounds, with six grammy nominations under his belt and having recently released his eighth studio album 'W:/2016ALBUM/' ticket holders can expect plenty of classic material alongside his new iconic show. Hip-hop legends and ultimate party starters House of Pain who created the iconic 'Jump Around' also announced for this year's Electric Castle. Recently reformed and rarely touring outside of the US this will be a special performance to witness. English punk-rockers Slaves also make an appearance during the five day event, bringing their much loved raucous sound to the festival. Others announced on the live set up are the Icelandic Gus Gus as well as Atari Teenage Riot and Tommy Cash.

The electronic offering is bolstered with Drumcode Record's own Maceo Plex who will deliver a massive techno set while everyone's favourite DJ and newly stated BBC Radio 1 presenter Eats Everything will bring the party to the castle. Duke Dumont exploded on to everyones stereo back in 2013 with his chart topping hit 'Need U (100%)', now he is set to bless Electric Castle for the first time while the mysterious Claptone will perform his thumping vocal-led tech house with Troy Boi, MJ Cole and Hospital Records very own S.P.Y also added. To bring the tempo back down, London residents and reggae superstars Reggae Roast will be on hand to provide the summer vibes alongside King Jammy and Zion Train.

For 2017 all the camping facilities will be enhanced for a better all round camping experience. Beyond bringing a tent, festival-goers can choose from three extra options including pre-pitched tents, dream tents and Swedish lodges featuring wood cabins for four people.
Returning bigger and better than ever before, the festival will also grow with two ‘big top’ covered tents. With a 24 hour music policy, art installations, performance art and TEDx Talks plus an untold amount of food vendors, Electric Castle provides an experience like no other festival out there. 2017's event will be the biggest yet welcoming over 130,000 revellers all tucked inside the walls of a 15th century castle.