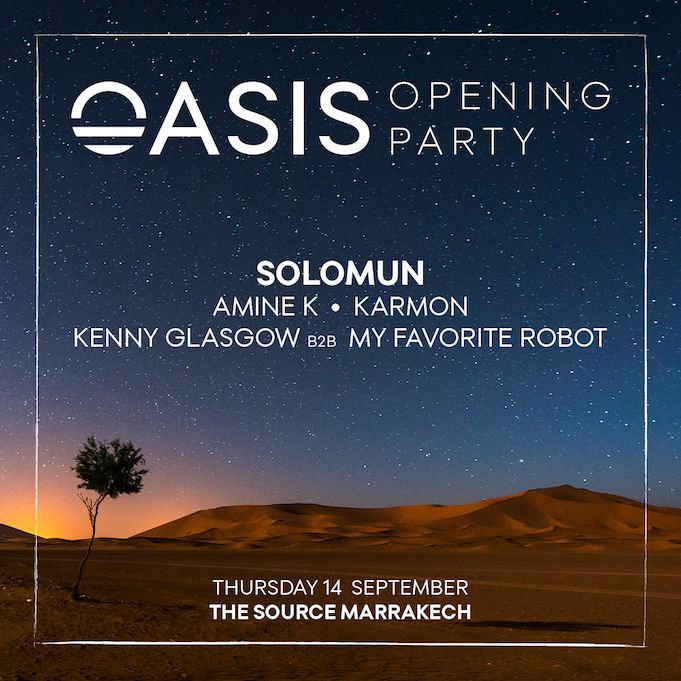 Oasis Festival adds an extra day in 2017, announcing an official Opening Party set to take place on Thursday 14th September. Festivalgoers eager to start the celebrations early will be treated to a headline performance from Solomun, sets from Amine K and Karmon and a back-to-back session from Kenny Glasgow and My Favorite Robot. Tickets for the Opening Party are on sale now!

With two successful Ibiza residencies to his name, (Solomun+1 at Pacha and Solomun+LIVE at Ushuaïa), two highly-respected labels and a reputation as one of house music’s most dexterous selectors, Solomun is currently riding high as one of the most in-demand DJs on the scene. The Diynamic label head’s infectious passion for music is always delivered direct to the dancefloor, and with guaranteed track after track of quality music, anticipation is high for Solomun’s Oasis Festival debut!

Amine K has been an integral part of Oasis since the festival’s first edition in 2015. Co-founder of Morocco’s influential Moroko Loko parties, the enigmatic performer is a true ambassador for the country’s underground scene. Mixing up Moroccan influenced music with sounds from all over the world, Amine has built a loyal following not only amongst the Oasis crowd, but on the international scene too, and his set at Oasis 2017 is sure to be another standout performance.

Also lined up for the Oasis Opening Party are Dutch DJ and Diynamic mainstay Karmon, who brings a set brimming with melodic house and tech, and a back-to-back session from North American electronic music pioneer and former Art Department member Kenny Glasgow and fellow Canadian act My Favorite Robot.

Tickets for the Oasis Festival Opening Party are on sale now, priced from just €45. To book your place visit theoasisfest.com/tickets/opening.

Book your place at Oasis 2017 at www.theoasisfest.com.