deadmau5, Nero & Rødhåd To Perform At ULTRA Europe For The First Time 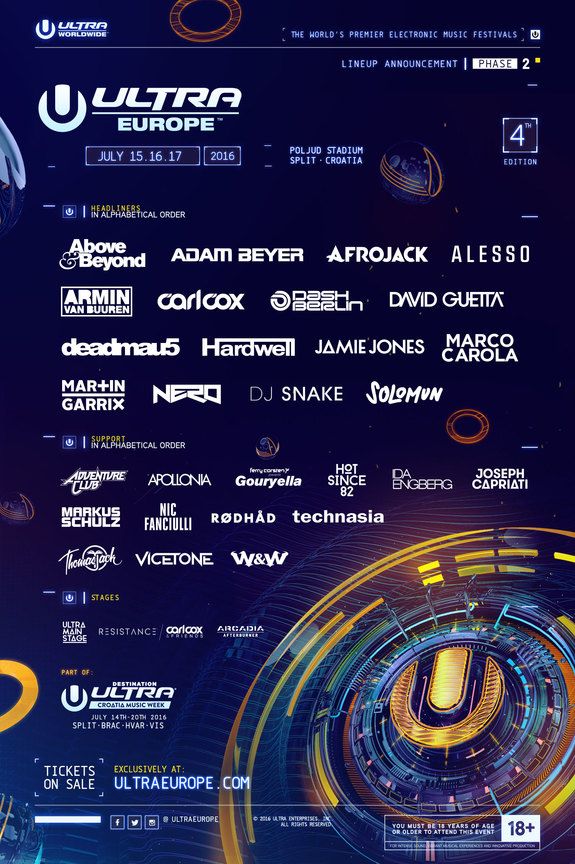 deadmau5, Nero & Rødhåd To Perform At ULTRA Europe For The First Time

With less than two and a half months until it kicks off, Europe’s ultimate summer paradise, Destination ULTRA – Croatia Music Week, is shaping up to be one for the record books as it announces a slew of celebrated acts set to perform across the week.

From July 15-17, the main event of the week, ULTRA Europe, takes over Split. The aforementioned Phase Two artists join an already stacked list of headliners that were announced for Phase One including (in alphabetical order) Above & Beyond, Adam Beyer, Afrojack, Alesso, Armin van Buuren, Carl Cox, Dash Berlin, David Guetta, Hardwell, Jamie Jones, Marco Carola, Martin Garrix, DJ Snake and Solomun, as the largest electronic festival in Croatian history looks to build ever further upon on its burgeoning reputation.

The momentous week continues with the ULTRA Yacht Regatta Party on July 18, where revelers will party at the Zlatni Rat Beach on Braç Island. Don Diablo and Robin Schulz take the reigns at ULTRA Beach the next day on July 19, with support from Sam Feldt, as Ultranauts head to the idyllic Island of Hvar. As Destination ULTRA – Croatia Music Week draws to a close, the festivities will finish on the beautiful island of Vis for the Official Resistance™ Closing Party on July 20, headlined by Hot Since 82 and Nic Fancuilli.

With early bird tickets sold out for the main event in Split already, revelers will have to act fast in order to snap up the remaining few at €169, before the price rises to €199. To help with the purchases, ULTRA Europe is now offering a payment plan, where fans can split the total cost across four monthly installments. In a new initiative for 2016, group tickets are also on sale, with those who purchase five tickets at once, receiving a sixth for free! All tickets are available to buy exclusively from www.ultraeurope.com/tickets.