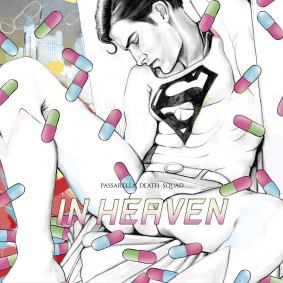 Passarella Death Squad return to their own imprint with three captivating cuts entitled ‘In Heaven’ including remixes from Naive founder Violet and Berghain’s Norman Nodge.

After releases with Perc, Oliver Ho and label boss Danny Passarella – the ever-exciting Passarella Records return to the frame for the first time this year. Well known for their reputation as one of London’s top cult clothing designers, Passarella Death Squad’s music has been described by the label themselves as ‘a diverse combination of contemporary electronica and haunting beautiful songs’. Including remixes from Rádio Quântica co-founder Violet and Berlin’s Norman Nodge, ‘In Heaven’ follows previous appearances on labels like Perc Trax, Days of Being Wild and The Republic of Desire.

‘In Heaven’ kicks off the bunch offering a hypnotic chugged out ambience with nu-wavy weaving synths, spaced-out vocals and off-centre modulations. Lisbon based Violet’s remix presents a breaks-tinged drum groove, fused together delightfully with the deep riding elements from the original. The legendary, Norman Nodge offers his version balancing powerful 4×4 percussion, layered with distinctive melodies creating an outlandish atmosphere throughout.