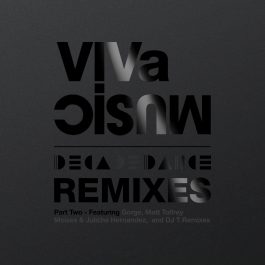 VIVa puts together another talented roster of producers to remix tracks from their ten-year celebration ‘Decadedance’. 8bit Records co-owner, Gorge has spent years perfecting his craft playing at some of the world’s best clubs including Watergate, Rex and Zoo Project whilst Moises & Juliche Hernandez have gained notoriety helming their own Downhill Music imprint. Matt Tolfrey is highly regarded for running his longstanding label Leftroom Recordings and DJ T’s multifaceted career has made him an integral part of the electronic music community through his productions, journalism and club ownership.

Matt Tolfrey utilises percolating rhythms, sharp cymbals and sustained bass tones on top of the occasional snare roll in his Ghetto Dub Remix of ‘Rider’ before DJ T reworks ‘Which Way To Go’ with a rumbling sub, enchanting mid-range synth melodies and mesmerising pads along with transitional vocal licks to close out the release smoothly.