Dimitri From Paris In The House of Disco 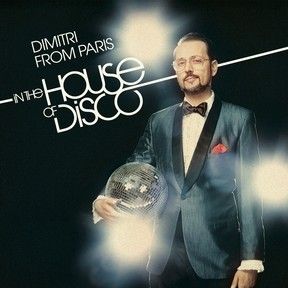 Dimitri From Paris In The House of Disco

Dimitri From Paris In The House of Disco is the latest musical milestone from the unequivocal Disco Don; an auditory smorgasbord of House and Disco from the likes of Diana Ross, Hercules & Love Affair, Sister Sledge, Lindstrøm, Chic, Todd Terje, DJ Pierre and many more.

In the late 70s and early 80s, after its bubble of underground popularity and credibility had well and truly burst, Disco began it’s slow but steady mutation into House. Aided by early proponents Frankie Knuckles, Larry Levan and their contemporaries, House became the music of choice for the burgeoning clubs scenes of Detroit and Chicago, while Disco’s days began to look well and truly numbered.

Fast-forward 20-odd years, and as House enjoys arguably the most popular period in its history, the roots of the scene, and the Disco on which it was based, are once again being championed by producers and DJs alike. In 2014, House and Disco live happily side-by-side: a circumstance that Dimitri From Paris In The House of Disco celebrates.

While, of course, the history and heritage of Disco has to be treated with the respect it undoubtedly deserves, we should perhaps be equally as excited by new Disco records, many of which grace this new collection. “A fresh generation of artists is finally and unabashedly recording new, sample free, Disco Music” reports Dimitri “and the electronic House sound of its origins is making a stylistic return with a sound I would call ‘neo-vintage’: one that embraces the foundation of current Dance Music, celebrating its culture and history and making it contemporary in the process.”

Lindstrøm, Skream and Todd Terje are stand-out, modern-day champions of the ‘unabashed’ Disco sound cited by Dimitri, and all make an appearance here, the latter’s electric ‘Delorean Dynamite’ a neon-fused, hands-in-the-air highlight at the midway point of Dimitri’s first mix. Representing true Disco heritage, Tom Moulton reworks Brand New Heavies ‘Sunlight’, while Dimitri himself gets in on the action, dropping his own remixes of seminal Disco artists Sister Sledge (‘Lost In Music’), Diana Ross (‘The Boss’) and Chic (‘LeFreak’), the last two of which are exclusive to this release.

CD2 celebrates all that is exemplary in ‘Neo Vintage House’, again matching House masters past and present, occasionally in the same track; the Fingers Acid Jam Vocal Edit of FCL ‘It’s You’ being a standout example. Elsewhere you’ll find a group that absolutely embodies the original spirit of House and Disco, the inimitable Hercules & Love Affair who’s ‘Do You Feel The Same?’ closes out the mix.

Fittingly, Dimitri has the last word. “This new compilation is a testament to how Disco and House are intertwined three decades after their inception” he says. “Rather than focusing solely on classic original recordings, I wanted to show how those sounds were made contemporary without losing their spirit.

“I would like to dedicate this collection to the recently deceased Godfather Of House, Frankie Knuckles. A key person in the mutation of Disco into House, he best described House music as ‘Disco’s Revenge’.