Platinum-selling UK trio Disciples make their debut on the iconic Ministry of Sound imprint with their new single ‘I Got You’, out 2nd October.

‘I Got You’ is a distinguished dance anthem, combining sunkissed piano chords and energetic drums, with the trio’s very own Duvall and Luke Mac delivering their trademark complementary vocals. The track marks a fresh chapter in their musical journey, as they look ahead with a string of exciting releases in the pipeline.

Speaking on the release, Duvall from the group says, ‘it’s been a while since we’ve been this excited about a new single.’ He continues, ‘the time feels right to drop a feel-good record when the whole world needs a bit of positivity. Not only are we releasing a new wave of music, we’re doing it on one of the sickest dance labels on the planet, Ministry of Sound.’

It follows ‘Only The Gods’ / ‘Better On My Own’ – Disciples’ double-single collaborative release with Hot Natured pairing Lee Foss and Annabel Englund. They also participated in Danny Howard’s Lockdown Link-Up, where he paired 16 of his favourite producers, which saw them collaborate with Dennis Ferrer for ‘Whisper’. Premiering on Danny Howard’s Radio 1 show, the record also received support from Annie Mac. More recently, they remixed ‘Fake Friends’, the single from PS1 & Alex Hosking .

One of the biggest groups in British dance music, Disciples have amassed over 1 billion combined streams and 2 billion YouTube views across their catalogue of music. With a plethora of infectious records under their belt, the trio have garnered consistent support across BBC Radio 1, Capital and Kiss FM. Reaching the coveted #1 spot on the station’s Dance Chart for underground banger ‘48HRS’, they were also crowned Annie Mac’s ‘Hottest Record In The World’ and Danny Howard’s ‘Friday Fire’ with groove-led ‘No Ties’, and have previously enjoyed a six-week run on the station’s A-List with Platinum smash hit ‘On My Mind’. Not stopping there, they delivered an impressive mini-mix for Annie Mac and an Essential Mix for Pete Tong which were both met with strong praise.

A triumphant summer hit, ‘I Got You’ sees Disciples enter a new era as they join forces with Ministry of Sound to continue fulfilling their legacy as one of dance music’s most exciting crossover acts. 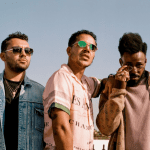