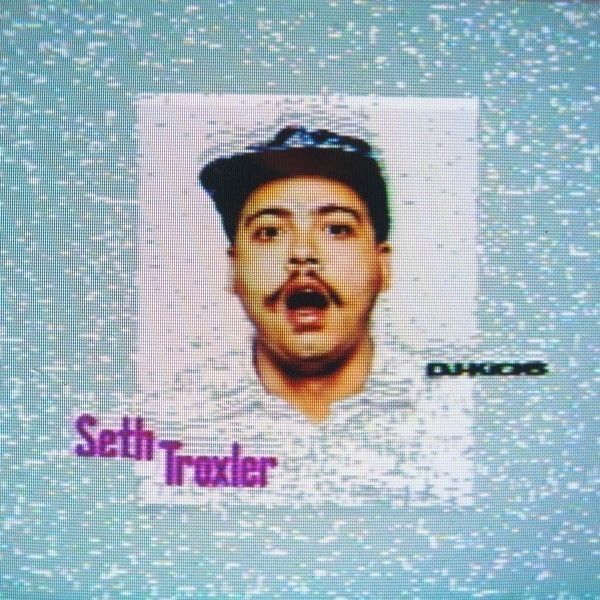 Once in a generation an artist comes along that shakes up the status quo. Over the past decade, Seth Troxler has become a visionary and authentic voice in dance music, his jovial personality cutting through the noise and continually playing by his own rules. Growing up between Detroit and Chicago, his musical education carries enviable credentials, with his step dad a local radio personality who championed the early sounds of house music.

“For my DJ Kicks mix I wanted to do something that was honest,’ explains Seth Troxler. ‘I went out in the morning, micro-dosed myself and did all these errands around town. Then I came home at night and did the mix one take. I wanted to curate something for people to easily listen to, that was nice, and funny and got you in the mood to do your homework, or drive that hour long trip when you need to go somewhere. I see this mix as a gay man named Rodney. Or a big black woman named Birtha.”

The DJ Kicks mix offers Seth a rare chance to indulge in the more eccentric side of his musical persona. Starting with a folk ballad from Niki Nakazawa, soon to be released on one of his record labels, Soft Touch. “Niki is an old friend of mine who lives in Mexico City. It’s a track that I’ve had for about five or six years and been trying to put out for ages. I finally found the perfect place for it.” This sublime piece of music is juxtaposed neatly with the piano solos of Herbert ‘Suddenly’, elegantly remixed by Phil Parnell, before driving into the supernatural frequencies of DJ Koze’s ‘Bodenweich’ for Kompakt and the psychedelic free-form of Cobblestone Jazz.

Troxler’s mix is almost a musical map of his own journey to the present day, these first few tracks carefully navigating through his years in Berlin, his first taste of living in Europe and a place where he truly found freedom in his own expression, best tasted in the liberated sounds of Ricardo Villalobos & Max Loderbauer’s remix of Wolfgang Haffner’s ‘Melodia Del Viento’. The quest is also firmly rooted to his adolescence and earliest experiences with dance music culture, through cuts from Chicago pioneers Byron Stingily and Derrick Carter on Nervous and Classic labels, respectively. “People don’t realise I have such eclectic taste,’ Seth reflects on the mix. ‘I think people get caught up in the image of the jokes that I make and they forget that actually listening to me play, or the music that I collect is actually pretty far out there.”

His current landscape is brought into focus through music on his own labels, Tuskegee and Soft Touch and a DJ Kicks exclusive track from Troxler together with Dutch DJ and fellow legendary producer, Tom Trago, made earlier this year. “The exclusive track was after the closing of Trouw in Amsterdam, a place that we both loved dearly. Club Trouw used to be the printing press for Amsterdam’s main daily newspaper and De Natte Cel (translated into English ‘The Wet Cell’) was the shower room where the employees would wash the ink off their bodies that they specially opened for the last month that the club was open. Tom and I both played in De Natte Cel during the closing party and were so inspired by the space we left Trouw after around 48 hours, partied all night at the hotel and then went straight into the studio.”

True to Troxler’s character, the mix has a whimsical nature and a thoughtful and timeless narrative, bearing a tenacious episode for the DJ Kicks series that gives a true insight into the man behind the well-preened moustache and cowboy antics. “It might seem obvious but to be a successful DJ, you have to be really into music. Collecting music is my life. This is a proper DJ mix – a house mix. It’s good music that works to listen to at any time.”

DJ Kicks began in 1995 as the first fully licensed, commercially available DJ mix series, and has served as a consistent indicator of the climate of electronic music culture for the past twenty years. Acting as a document of contemporary club-going tastes as well as an artistic statement for the compiling artist, entries in the series both reflect their own time, and aim for timelessness. Past contributors to the series include electronic music luminaries Carl Craig, Hot Chip, Kruder & Dorfmeister, John Talabot (whose mix topped Resident Advisor’s DJ mix chart for 2013), Photek, Thievery Corporation, Four Tet, Apparat, Maya Jane Coles and many more.