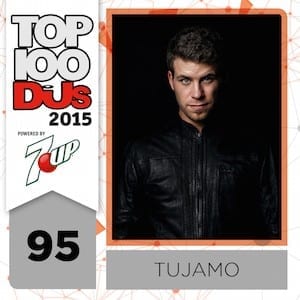 After a truly remarkable year to date, German DJ & Producer TUJAMO is pleased to announce his debut entry onto the DJ Mag Top 100 for 2015.

Placing at #95, TUJAMO’s blend of highly energetic, intense music is so one of a kind he coined his own term for it. His signature ‘electro bounce’ sound has propelled him onto the prestigious chart alongside other artists such as Sander van Doorn, Knife Party and Robin Schulz.

Undoubtedly one of the most successful acts of 2015, TUJAMO has collaborated with some of the worlds biggest artists including the world’s new #1 Dimitri Vegas & Like Mike, Steve Aoki, Showtek, Jack Ü, deadmau5, Laidback Luke, Danny Avila and more on a score of chart topping records and remixes.

With every one of his productions landing in the top 3 of the Beatport overall chart, he also secured 4 number 1’s in a row. ‘Booty Bounce’, ’S.A.X’, ‘Nova’  and his gold (Canada) and platinum (US) record for ‘Delirious (Boneless)’ w/ Steve Aoki & Chris Lake, all contenders for track of the year.

His latest release, ‘Cream’ – a collaboration with Danny Avila peaked at number 2 on the Beatport chart and remained in the top 10 for more than five weeks until now, as well as the controversial music video receiving more than 1 million views in the first two weeks on YouTube.

A true workaholic, TUJAMO’s commitment to his work is unrivalled – with a hectic touring schedule that will see him play over 150 shows by the end of this year, performing across a range of cities in over 20 countries around the world from headlining some of the world’s most prestigious clubs such as LIV & Story in Miami, Pacha & Webster Hall in New York, Exchange in Los Angeles, Green Valley & Anzu in Brazil, Cavo Paradiso in Mykonos, Pacha & Amnesia in Ibiza, T2 in Tokyo and Bootshaus in Germany to playing festival mainstages all over the globe including Creamfields UK, TomorrowWorld, Beyond Wonderland, Parookaville, Mayday, Street Parade, Nature One, Nocturnal Wonderland, Untold, Sunrise Festival and many more.