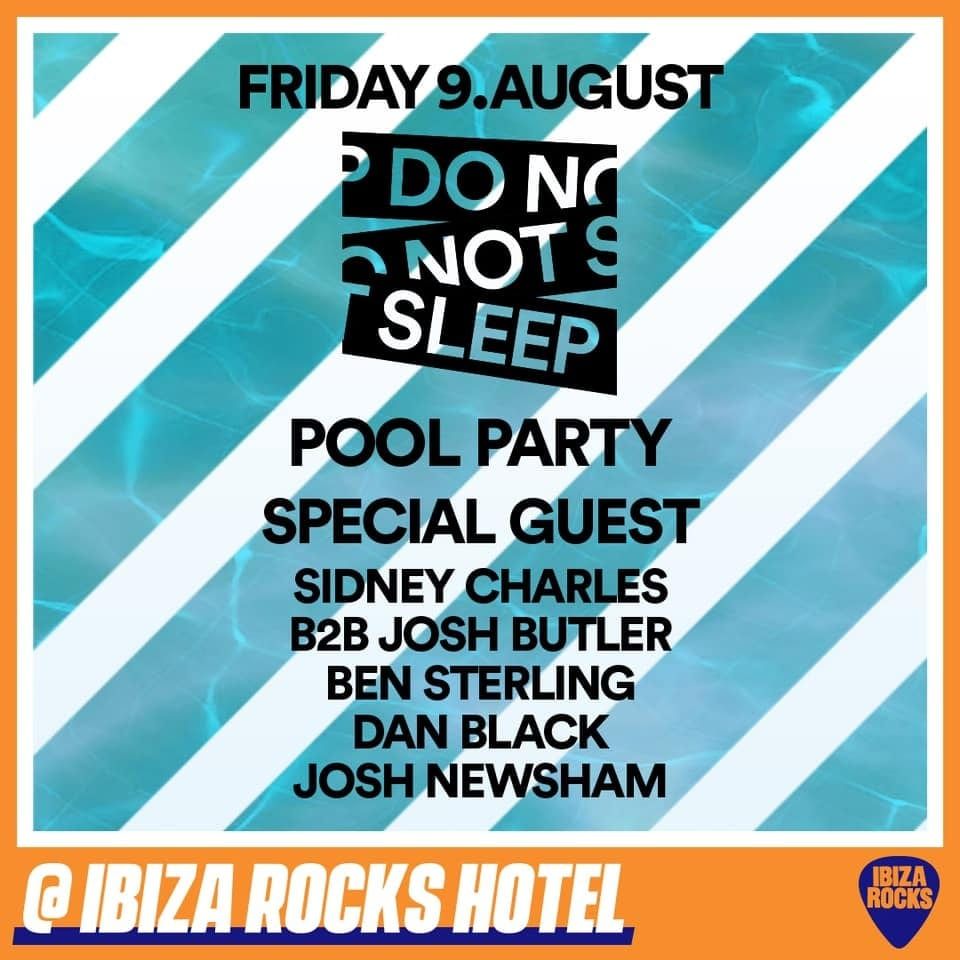 Renowned for being one of the scene’s favourite bastions of house and techno, Do Not Sleep is often found pushing the sound systems of underground club and warehouse spaces to their limits; following their sell-out Ibiza opening party earlier this year at the open-air Cova Santa venue, the island’s favourite party crew return for another taste of the daytime with their first ever Pool Party takeover at Ibiza Rocks on Friday 9th August.

A new venue doesn’t require a new sound, and Do Not Sleep fans can rest easy knowing the very finest selectors have been invited down to ensure this is a day to remember. In typical DNS style, the team have lined an extra special guest to headline proceedings, one who will be playing an exclusive house set – who might it be, though?

Next up we have a B2B from two Do Not Sleep regulars as Sidney Charles goes toe-to-toe with Josh Butler for a set that promises to span the full breadth of house and techno, with plenty of curveballs thrown in for good measure. Joining them is one of the hottest names around right now, Ben Sterling – at an age where most DJs would be considered “up-and-coming”, his recent sets at DC10 and releases on Hot Creations suggest he’s arguably already put his stamp on the scene.

An expert in the art of the pool party, Electric Ibiza’s own Dan Black whose presence on the island has seen him with a residency at Cuckoo Land will also be taking control of the decks, and completing the line-up is Josh Newsham whose low-end, groovy house sound will be setting the tone for the day.

Speaking about the decision to host their first pool party, Do Not Sleep’s Neil Evans said:

“Do Not Sleep has always been associated with the darker night-time venues, but after having a taste of the open-air DNS vibe at Cova Santa at the start of the season, we were keen to do something unexpected again and the opportunity to host our own pool party at Ibiza Rocks was too good to miss. We won’t be holding back from the standard Do Not Sleep sound that people expect from us, and the special guest is a DNS favourite who will be digging deep into the record collection for this one-off set.”

TICKETS FOR THE DO NOT SLEEP POOL PARTY ARE AVAILABLE NO 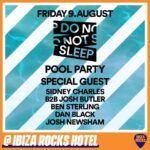